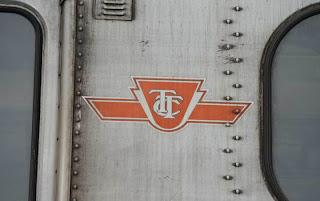 I saw no fairy dust in the air.

I felt no breeze from angel wings.

I heard no gentle chorus of hallelujahs.

But maybe that was because of the noise and the crush of people around me. Maybe it was because I was distracted by my partial responsibility for two little girls who were travelling with us. But maybe, and most probably, it was because what happened wasn't magical at all. Maybe it was just that something possible but improbable happened - like the the million monkeys typing on a million typewriters just hit the final key on the entire works of Shakespeare.

We were waiting for the southbound subway at the stop near our home. The Yonge and Bloor stop is pretty much always busy, but it was particularly crowded because there had been problems on the southbound line and there were long delays. With every minute the crowd grew more closely packed. As a wheelchair user, these moments can cause me panic. When people wait, they become impatient. When people are impatient, they can direct extreme anger towards those of us who move differently. I was concerned.

Finally the subway came and it was packed already. We waited for people to stream off and then along with the crowd we surged forward, staying tightly together. My family pulled around me, almost protecting me from others as we got on the train. We were on. The doors closed. And then it started happening. Three people sitting on the bench marked with the wheelchair symbol, all at once, as if orchestrated by the same heart, began to get up. I thanked them and waved them back into their seats, I saw that if I could swing around and back into the space by the other door I would be displacing one person, not three. And, truth to tell, that's the best place for me because I have a grip to hold on to. I looked to the woman, who caught my glance. She said, 'Would you like to use this space?' I said that I would. She moved. I moved. I was in place and out of the way. All done with gentleness and generosity.

The girls love the subway because we always, no matter what, get on the first car so they can see out the front windows. I admit that I, too, like watching the train hurtle through the tunnels and I like seeing the upcoming stations looking like they are floating islands of light in a dark world. The windows were all occupied by families with children. Ruby and Sadie each stood on tiptoes trying to see. They were noticed by a man who was with his son.

Let me tell you about this man. When we got on the train I heard him say to his son, in response to what I don't know, 'Don't worry, if you get frightened I will pick you up and hold you safe.' His voice was gentle and loving. There was not even the slightest hint of 'boys shouldn't feel fear' ... 'what kind of sissy are you' ... 'man up bro'. Not the slightest. His son, in response to the offer, hugged his dad's leg and from then on bravely rode the train.

So, that man, noticed our two little girls straining to look. By then Mike had picked Sadie up so she could see, Ruby being taller was getting a bit of a view. The man then crouched down so that he'd be beside his son and out of Sadie's way. He and Mike exchanged a few friendly words. Sadie got a good view and when the son moved to be closer to his dad, Ruby did too.

A woman was juggling a baby who was fussing. It was obvious that she didn't want the baby to cry and bother other people. A woman stood up, gave her the seat, and said, "Let the baby cry if she needs to cry, that's what they do." We all nodded. Mom relaxed. The baby sensed calm and fell asleep. Mom wiped grateful tears from her eyes.

From Bloor down past Union and  up to Osgoode it was like that. It wasn't a moment, it was a collection of moments, enough moments to make an experience. People being kind to people. People considering people. People deciding to create a welcoming and hospitable world. The the TTC advertises itself as 'the better way' ... and today the passengers made that true.

I was dazed by the experience.

I was heartened by the presence of heart on a crowded and noisy subway.

I know I should just be grateful. But, in truth, I want more.

Posted by Dave Hingsburger at 7:10 am

We should always want more...noticing, appreciating and sharing these good moments helps.
I think this day should be shared with the Toronto paper ( is it still the Star?) or some other mass media. There will be some that conclude all is well and their work is done but there will also be many who follow your lead on noticing and appreciating and doing...you are a great teacher.

Okay - that brought tears to my eyes. I remember riding home on a crowded bus years ago - about seven months pregnant - and standing up for about 40 minutes. No one even looked at me. Maybe things are changing ... or people in Toronto are nicer than people in St. Louis! :-)

This post gives me hope. I think that once someone is courteous and kind it spreads and others take up the tone. So glad that you and your family got to be part of that. You say that the subway stops were like little islands of light in the dark tunnel - sounds like the atmosphere in that car was an island of light too!

Yes I think I want more too!!

I have found over the last week that folks have been "nicer". I think the Boston incident has shaken people up. I hope the good from the bad continues.

When we look for and are open to the generosity of the human spirit, it often finds us. When we expect hostility and approach ready to react - we often create the very circumstance we fear most. Well done Dave - and citizens of Toronto - and the world. Jack Pearpoint