We were having tea. Somewhere I read a study that showed that just holding a cup of tea in your hands results in a sense of comfort and increased well being. I don't know if this was a 'faux science' thing or a real study, but nonetheless, it was certainly true for me that day. The regular tea shop guy wasn't in and the shop was managed by his son. We've met all of his kids over time and they are all part of what is clearly a close family. The young guy serving us that day is probably in his late teens, early twenties. We arrived as he was saying a fairly passionate 'goodbye' to his girlfriend who was on her way out shopping.

As we were having tea, his father called and we heard him talk to his dad about the store and he answered a couple of questions. Just as he was hanging up the phone he said, and not in a whisper, 'Love you Dad'.

When we were in the UK we found a Christmas ornament that looked exactly like a dress that only a drag queen would have the balls to wear. I loved it. I immediately thought of a fellow who runs a shop near us. We were a bit surprised, one day, to find out that the nice young woman who works there was his daughter. Later we found out, and met, a number of his kids. He is about our age and, during his youth tried to deal with his sexuality by marriage and procreation. He came out late and he came out big. We picked up the ornament and stowed it away. A couple days ago we took it over to the store to give to him. He loved it. His daughter grabbed it immediately and they began a friendly tussle over who's tree got the dress. Somewhere in there, he grabbed her and kissed her cheek. She said, 'Love you Dad'.

A few weeks ago, we were sitting waiting to take a flight. An older couple were sitting with their daughter who was, like the fellow in the tea shoppe, in her early twenties. They were all 'the subject of glances' (which would be the title of the autobiography I'll never write). The 'eye magnet' was the fact that she had Down Syndrome. They were all clearly tired. It was an early flight and as a result the boarding are was both full and quiet. She was leaning up against her Dad. He was reading a book. Just as she was about to nod off he said, in a stage whisper, 'No snoring, OK, I'm trying to read.' She looked up at him and giggled. Mom smiled. She said, 'I don't snore like you do, you wake up the trees!' They laughed. She said, 'Love you Dad.'

For those who are tired of 'Christmas Stuff' right now - stop reading and make what you will of the above!

This has always been the season of 'Madonna and Child' ... of 'Silent Night' and 'Ave Maria'. But, always, somewhere through the season and the retelling of the Christmas story, I think of Joseph. Of that guy who trusted the word of a young woman with a strange story to tell. Who was the first to believe - simply on faith - in the Christ child. His love was necessary for their survival. His love is maybe the most surprising aspect of the entire tale. But, I never hear of Joseph. Ever. Culturally, I rarely hear much about men who love well their children. But, every now and then, I get reminders, like ornaments on my emotional tree, that the human heart is simply the human heart. That love is  a universal possibility. That my heart, a man's heart, can rise to the challenge of love.

Joseph sits quietly, at the sideline of the story. Simply satisfied, like no one can imagine, that that little baby will one day say, 'Love you Dad'. And that's enough for him. 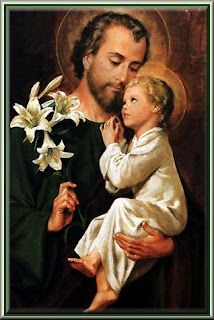 (Image of Saint Joseph holding his son in his left arm while his right hand holds lilies.)
Posted by Dave Hingsburger at 3:38 am

That made me cry, Dave. Thanks.

Beautiful Dave! So true and so inspiring!

Too many tears to see the keys clearly...

I remember when the volcano ash prevented me from flying from the UK to Canada for a conference and on the Wednesday night I spoke to my father who was on holiday in Spain and as usual we told each other we loved each other. Next day my father passed away in Spain and the volcano ash ban was lifted. I was so glad that the night before we spoke. Never be scared to tell your folks you love them (if you do that is!!).

Aaw. Great post. I come from a wonderful dad who was the primary caregiver and now my brother and male cousins are taking up the tradition. Love this!

I am an atheist. I looked to the story of the nativity to find some meaning. I found none. What amazes me about this post is that you managed to find something I've never seen before. As a result, for the first time in nearly 60 years, I'm going to sit down and read the story. I wonder what else I missed there. You may be charged with murder as my wife will surely drop dead when she comes into the den to see me reading her Bible. I was touched by what you wrote. My stepfather was the most wonderful man I ever knew.

I loved this wonderful fresh insight into part of the Christmas story.

I'm reading a fantastic book right now that I got from the library--(about a father and son)--Lost December by Richard Paul Evans. It has me so hooked I can't put it down.

home in toronto (and area) for xmas and my grandmother's 99th birthday (check her out, she's a true inspiration: http://youtu.be/TJkh8wEtds4 ), and a wonderful chance to share many "i love you's" face-to-face.
have a merry christmas!

My children's primary school nativity play this year was 'Holy Joe, the unsung hero'. Joseph's part in The Story is rarely emphasised and their teacher thought it was time that changed!

When I find a blog that meantions a drag queens testicles thats also a religious meditation, I know I'm reading Dave Hinsburger. You have both a unique talent and a completely fresh approach to life.

Tears...and wishes that my (adult) kids would step up and say those three words to their Dad. On their own. Unprompted.

Hope you don't mind Dave but I have copied your post today over to facebook as you are absolutely right. One of my favourite songs is on this very subject http://www.youtube.com/watch?v=H6onryQfuCQ Joseph's song by Michael Card.