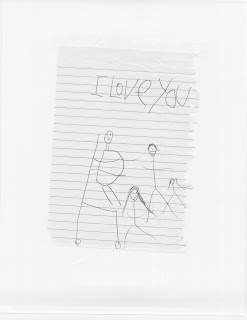 (Description of Image: A child's drawing on a piece of lined paper. The words 'I love you' are at the top. Four people are represented in the picture, a big man in a wheelchair, a little girl with long hair, another man with a moustache and another little girl with shorter hair.)

I was sitting in the car while Joe and Marissa were transferring stuff from our car to hers. We had said our goodbyes to Ruby and Sadie and had received big hugs. We'd all gone to a movie and had stopped for tea and treats afterwards. We wanted to chat with the kids about our upcoming trip and let them know we were going to be gone for a month. Children experience time differently than adults and we wanted to be clear that we weren't dropping out of their lives. We will be chatting with them less frequently and certainly wouldn't be seeing them for a long stretch. Ruby wanted to know exactly where we were going to be and she got really excited that our plane was going to land in the same city that the Queen lives in. "Does she know that her face is on our money?" Ruby wanted to know and we assured her that she did.

Anyways, we'd brought up some stuff from the states, including two big boxes of Hugs which the kids adore, mostly for the shape of the bottles. So, goodbyes said, I was in our car as the last of the boxes and bags were transferred to theirs. Joe came back with a drawing that Ruby had sat doing while the transfer was happening. You will have no difficulty determining which of the two adults is me, given my wheelchair and Joe's moustache, of course, and that's Ruby between us and Sadie on the other side of Joe.

Joe said that just before he left Ruby had called him over. She had drawn three lines on her pad of paper. She wanted him to write down the date we leave, the date we come back and the number of days that we will be away. She wanted to have a clear understanding of our trip and knowing when she can expect to see us again. I told him that as he was busy doing that, I was sitting staring at this little piece of note paper, The wonderful portrait of him and I and the two kids. I loved how we were united under a banner proclaiming that we are loved. I also like that my size and my wheelchair are just simply part of the picture. It reassures me somehow that Ruby doesn't normalize me in this representation. It means that she sees me, as I am, and loves me, as I am. That matters.

It mattered even more as I have spent my life working towards a day where we can all see each other, respect each other, honour each other's difference. A lifetime working towards the natural inclusion that could come if we would only have it come. Ruby gave us a gift, to remember her and her sister by, but she also gave me a glimpse of what could be - and that make me want to do, what I do and fight the fights I have to fight, even more.

We have a piece of paper now.

With three lines on it.
Posted by Dave Hingsburger at 5:05 am

Yeah!
That is absolutly reassuring!

What precious gifts children give. I understand how both pieces of paper will be guarded by those who hold them because they connect people who love one another.

Bon voyage! You carry us all with you on your adventures in England. Did you ever think of booking a room for 500 or so of us? :)

Pretty much unrelated to anything, I think you might find this quote from Patricia Cornwell who writes murder/mystery books rather familiar in terms of denying our true identity, whether gay or religious or disabled or whatever else makes us unique:

"I'm sure I lost readers when people found out I was gay, and I've probably got readers because of it, too. I just believe you shouldn't, you can't lie. And if you do, what you're really doing is disparaging a whole group of people 'cause you're saying, 'I don't want to be associated with you,' and that's just wrong."

You have spoken earlier how you and Joe have touched many lives through your books, talks, info sessions, etc. How if it made a difference, even in one life, it was worth all the hard work. When I read stories like this one, and many others you have been kind enough to share - it strikes me how much you and Joe have shaped these young lives. How they have grown in love because they are loved. They love Dave and they love Joe - who happen to sport a moustache and a wheelchair. Life lesson. What a precious piece of paper with words that will be written forever on your heart.

I was just noticing who has hair too! Ditto ditto for all of the above. Your gift circles wide out into the world Dave. Your girls will circle it even wider,and while they will bumpup against obstacles, the fact that they have such a great big family loving them all the way will make a huge difference. Hooray for Mike & Marissa ... hug them for all of us!