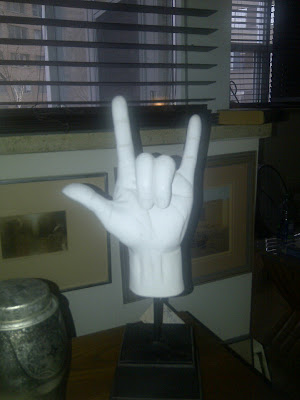 Today, just before writing this blog post, Joe and I were driving home and I noticed a store with a 'going out of business' sign on Yonge Street. In the window stood a quite beautiful plaster reproduction of a hand signing 'I Love You,' in sign language. For those who don't know the letters "I," "L" and "Y" in finger spelling are put together to make this sign. I have always liked it. When we got home I called the store to see if it was for sale or just display purposes. It was for sale. We headed down to get it and it now sits on the corner of my desk. It was the perfect day to buy it because today something happens that we make artistic history ... but then, that's the subject of my blog post ...

I wasn't the audience!

THAT'S WHAT WAS WRONG!!!

I didn't understand it until I read Andrea's blog post about the first all silent, all sign episode of an American Television programme. Switched At Birth will break new ground tonight. Andrea is well known to readers here as she frequently comments and often her comments add new dimensions to what I've written about. As I was reading her post describing the first time she 'met herself' in a book ... I was drawn to remember.

Joe and I went to see a movie called A Different Story and were excited to see a movie that had been trumpeted as having gay characters in what was being coyly called a love story. We sat there, horrified at what we saw. These weren't gay people, these weren't people we knew, they sure as hell weren't like Joe and I. The whole thing seemed like this massive betrayal. Worse, we sat in a theatre full of straight people who were lapping it up, loving the story of a gay man and a lesbian woman who fell headlong into heterosexuality as their hearts found each other. I felt so utterly disenfranchised. Didn't they even think of talking to some gay people, didn't they think that maybe gay men and lesbian women might be actually gay men and lesbian women. I couldn't understand why they did what they did.

Until I read Andrea's piece.

As she described being told that the deaf little girl in the story wasn't there for her ... she was there for hearing girls. Andrea wasn't in the audience - the writer never considered that there would be a little deaf girl reading the book. The writer couldn't conceive of deaf people as AUDIENCE. And as a result, they had no, that's none, responsibility to ... a little girl named Andrea.

The same was true for the movie we watched that day. It wasn't made for me. No only was there, at the time, no representation of 'me' on the screen there was no consideration of 'me' in the audience. It has been with the discovery of gay people as 'audience' as 'market group' that things have changed. That and watchdogs like GLAAD which now carry a big stick and that stick is ... our wallets and our voices - as audience. Comedians and commentators who use the 'R' word fear little in the way of reprisals because they are speaking to an audience that they understand to silently endorse their language ... because we, as of yet, have been excluded from the audience.

But that's changing isn't it?

We are becoming more visible and more vocal. We are beginning to ditch 'the attitude of gratitude' and adopt and 'expectation of respect.' This is a change that has been long in coming. And it's about time.

Tonight, at the end of Swtiched At Birth, there will be one hand clapping and one hand signing 'finally' ...
Posted by Dave Hingsburger at 12:00 am

I have something I'm writing, a novel called Pride's Children. Here is a tiny excerpt:

...“If I were younger.” And beautiful. Beauty deserves beauty. If I weren’t sick.

“A cat is allowed to look at the Queen, Kary.”

“A cat is not allowed to want to be Queen.”

“Better not to want?”

Thank you, Dave, for your wise take. Although I didn't put it quite the way you had put it here, I think you've put your finger on exactly the problem I had with that Bobbsey Twin book 35+ years ago--the author didn't conceive of me as "audience" and thus ended up creating something that was very hurtful for me as a little deaf girl back then.

I think you may have overlooked the link to my post: http://ramblingjustice.wordpress.com/2013/03/03/1st-met-me/

Andrea, the link is there but the colours didn't differentiate enough, I've changed them. That should help. Thanks for pointing that out.

Thanks, now I see them!

Off-topic: Dave, I sent you an email. Today a popular online crossword puzzle (from Uclick) has a disability slur as an answer. I was shocked.

I hope things are changing. I still would never consider going to a comedy club, but maybe, maybe one day we can.your blog and Andrea's especially made me so sad.

Beth, I never received an email, can you send again??

I've loved every minute of Switched At Birth--never been more excited about a TV show--and tonight's ASL episode was no exception. I absolutely loved the experience of being immersed in an hour of purely visual TV. It was cool to be focused on one of my senses, instead of torn between half-listening, and reading a text message, and whatever else. The background music quickly became annoying, so I turned it down to almost mute. Somehow the focus and the quiet made me feel like I was "hearing" better. And it was just interesting to see the different nuances of how people came across without sound. Fantastic episode.

The show as a whole is fantastic. It doesn't just have a token disabled character (played by an able-bodied actor) with a cliche disability issue episode (written from an ableist perspective) now and then. (Glee, I'm looking at you!) Rather, there's an entire Deaf community. We get all kinds of views and perspectives on Deaf issues. The characters aren't entirely defined by being Deaf; they're rich and complex human beings, but we get to see how being Deaf impacts all aspects of their lives and selves. I've never seen anything like it on TV before. As a hearing person, it offers a fascinating new perspective for me. But as a disabled person, I identify so strongly with so much of this show, and it's incredible to see some of my most lonely struggles finally validated in the media.

My earliest memories of seeing somebody in a wheelchair in fiction are The Secret Garden (Colin), and Heidi (Clara). I didn't understand why characters in wheelchairs never stayed in their wheelchairs! (I'm looking at you again, Glee.) And it did bother me. Kids want to see characters that are "like them." But whenever I thought I found a "like me," they had to be fixed, made unlike me, in order for the book to have a happy ending. It hasn't changed much. Wheelchairs still generally only come out to indicate tragedy, and/or teach an inspirational lesson to the able-bodied. There usually isn't much for me to identify with.