I haven't worked so hard for a very long time. Vita was part of the Pride parade but we had determined that we wouldn't just 'be' in the parade, we wanted to 'work' the parade. As the parade is, in part, a celebration of diversity. We thought we'd come with a message. We had some 'Words Hit' cards printed up with a message: 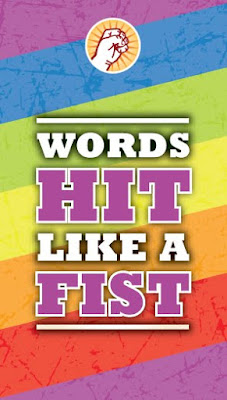 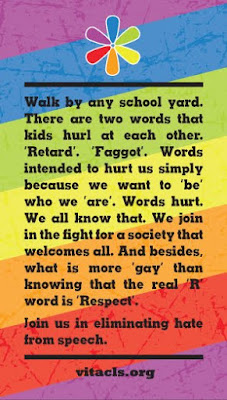 Our goal was to get as many as we could into the hands of those watching the parade. There were millions of people watching. We had to wait for nearly two hours to start marching, so I went up and down the line and found as many marching groups as I could that I thought really could use the cards, teachers federations, summer camps for kids, disability transport services, the works. I approached them, told them who Vita was and what our message was and handed out the cards.

They were wildly well received. One teachers group I spoke to got all excited about them and asked for a bunch for their school. One teacher said that she hated the 'R' word and taught her kids that it's mean. The kids used the excuse that 'everyone says it' and 'it's just a habit'. She taught them that if they start saying 're ...' to catch themselves and change the ending to 'diculous'. The kids thought that was 'fun' and she's elimiated it from her classroom.

Then the march happened. It was wonderful to see Vita members and staff walking down the street passing out thousands of cards. It was also wonderful to see people taking a second and reading what the cards had to say. Tessa, our neighbour, came along and allowed us to use her scooter to carry the cards. She said at one point she looked up and saw that on both sides of the street that there were at least a hundred people reading the cards. 'Some people stopped using that word today,' she said, 'and the others will use it, now, with growing discomfort.'

We also had some of those plastic bracelets made up. They were in a bright shade of lime green and they had a message imprinted on them, 'Words Hit'. On the other side was our email address 'vitacls.org'. We managed to get a special button on the site that will take you to information about the cards. There you will find 3 facts about the word and 5 things you can do to raise awareness about what it means and why we shouldn't use it. Again, people put the bracelets on right away. Hopefully they will go home, look at it and go and investigate.

So we worked, and laughed, and waved, and had a wonderfully good time. Vita's mission is summed up simply, 'providing safety, practicing respect, promoting community'. For the whole march, we accomplished mission. How good does that feel!

When it was all over we gathered and gave Luke Lynn a huge cheer for coming forward and suggesting the idea and then, once supported, took on setting up an LGBT group in the organization and making things happen so that the day was possible. Then we gave a cheer for Vita for making a safe place for 'all'. Then, tired and hot, we all went our separate ways.

I'd had enough and wanted home and air conditioning. We came up Yonge street, after the parade had passed by and then I noticed something. We had handed out thousands of cards. Though the street was covered in garbage (who brings up these people) there wasn't one, not one, card laying on the ground. They'd obviously been tucked away in peoples pockets, purses and wallets. And maybe, just maybe, in a conscience or two.
Posted by Dave Hingsburger at 4:20 am

Way to go! I am so proud of each member, staff and friend that participated. You have made a difference and touched the lives of thousands and thousands in spreading the message. Please know that you have just gotten a huge cheer and standing ovation from me and our board for what you did - You are VITA!

That's incredible!!! You should sell those bracelets! That's a cause I would wear on my wrist 24-7!!!

Vita is going to sell the bracelets, we are putting together a bunch of stuff for sale. I'll announce it on the blog when they are available.

I am so proud of being apart of VITA and the Pride Group. Marching in the Pride Parade, yesterday was a day I will never forget.
There was one lady in the crowd that I keep thinking about. She was almost lost in the crowd because she was a small woman in a wheel chair and surrounded by hundreds of standing people. When I walked by handing out the "Words hit like a fist" cards and yelling in the megga phone " Help stop the R and F word, Words Hit Like a Fist", A strong voice yelled out "Yeah, stop using the R word. I don't like it!" I looked and that voice came from the woman in the wheelchair. She even seemed surprised that she said it with so much volume. I yelled again in the megga phone "yeah stop the R word!" Then all the people that the card had been handed to took out the card and took a closer look. In that moment she felt the support of VITA's pride group and the crowd surrounding her. We helped change the world.

Marching in the Pride Parade, is a day that I will always remember. Most importantly, I enjoyed sharing the experience with my VITA family. Although, we waited nearly two hours and practically baked in the sun, it was worth it all. We handed out thousands of our “Words Hit” cards and our Vita bracelets. I couldn’t have felt more proud, helping to carry our banner and chanting “Vita Living in 3D, Diversity, Difference, Disability!” I can’t wait for next year.

I loved that i could be a part of something sooo big, and important!! i Loved that moment when we would hand out one of the words hit cards and the person who too it would stop for just the minute it takes .... to actually read it and instead of dropping it like so many of the other things being handed out, tuck it in to their pocket!!! we made a difference yesterday!!!!

This is such an antithesis of another site I read today that explained that a) Pride Parades are really just gay people wanting to show off and piss off "normal" people by being as flamboyant as possible and b) if you're morbidly obese you are not entitled to have any opinions (implied but not said: Because you are a a bad person who is lazy and disgusting).

One the days I feel like I'm screaming into the wind, there's you, being heard over the tornadoes.

Wow. We almost went to Toronto this year for Pride...the arrival of our new puppy changed our plans. I'm sorry I missed seeing Vita in the parade, though! What a wonderful agency. Are they hiring? ;-)

I was at Pride and one of your group gave me a card. I grabbed for it because it was colorful. I got distracted and put it in my purse. I read it later when I got home. It made me angry. I use that word all the time and I didn't think it was bad. I showed it to a friend of mine who said that she didn't like using that word because her sister was disabled and she got hurt by it. I know her sister and said that I didn't mean to her her and she said that it didn't matter what I meant it mattered what I did. Iasked her sister and she said that she always was scared when I was there because I said things that hurt her. I told her that I was sorry and that I would never do it again. I looked up your website but couldn't find a way to tell you what happened so I did a search and found this blog. I had fun at Pride but the best thing that happened to me was getting your card. I don't want to be mean.