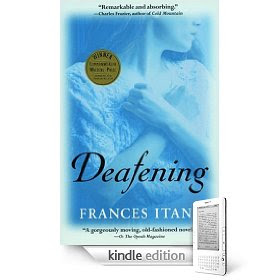 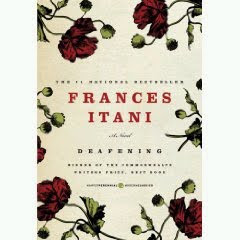 I was so relieved when my friend Belinda said of Deafening, the book picked for the next book club, "The cover is so beautiful." I rushed then to ask what the cover looked like. I had done some investigation into the cost and availability of the book and found that there are two editions, each with a different cover. One was blue, and, frankly, forgettable. The other is a startling design of blood red poppies against a milk white background. Belinda said, "It has the red poppies."

When I went to the book store to buy my copy of the book, I found that all of Itani's books were on shelves down near the floor. These are completely out of reach for me in my power chair. As I am big, the chair is big, as I am tall, the chair is tall. Without a reacher, I need help to get things that close to the ground. A book store clerk was walking by and I called over to her for help. She came willingly and I said that I was wanting a copy of 'Deafening' by Itani. She reached down and grabbed a copy of the book with the blue cover.

By then I'd become enamoured with the other cover, and thinking that I had a right to get what I wanted, I said, "Thanks but I'd prefer the other cover, please." She took the book back quickly - not violently but almost - and slid it with a thump back into place. Then she grabbed the other book and handed it to me, turning immediately to avoid any further conversation. I did call to her receding back, 'Thanks.'

I was appreciative of her help. Really. I didn't think that asking for the copy I wanted was wrong, I didn't think it was that much of a bother to replace one book and pull another. But as I drove up to the counter I began to wonder if I had been over-selective, if it really made a difference to have the one cover, not the other, if I had been an annoying and pushy cripple. As much as I try, when others are mean to me, I always assume I deserve it. I analyze all the ways that I 'set off' or caused the other's attitude or distress.

Every time I picked the book up and admired the cover, it really is pretty, I thought about the anger it caused and wondered if the amount of pleasure I got from the cover was enough to justify the upset it caused. I would sometimes think, maybe even wish, that the clerk - at the same time was wondering if her momentary display of anger was worth the effect it was having on her sense of self.

Anyways, the book is read and has moved from my stack to Joe's. I read in one of her blog posts that Belinda had started the book so I called her. We talked about the book and then she mentioned how beautiful the cover was.

An innocent remark that left me, ultimately, feeling innocent in having made my request
Posted by Dave Hingsburger at 12:37 am

Iam anxiously awaiting my copy in the mail....Can't wait to get started! :)

this is my first come to your blog,and i read agood information that you put in here..good job i like it
keep going thanks.

Her rudeness is not your problem. When you work in a shop you are there to serve customers and help fulfil their needs. With courtesy if not a smile. 'Cos that's your job.

Yes, the book touches my sensibility for beauty! It also feels lovely in my hands--the turning of the page gives pleasure. The words are beautifully crafted, taking us into the world of silence in which Grania lives.

I am enjoying every stolen moment with the book and am so grateful for the person who suggested that we read it, and for Dave's bravery taking the risk of picking a name out of a hat!

I like the blue, but it's up to you to determine which you want. It amazes me when people actually exert more energy being huffy (or sometimes arguing) than just doing the extra task in the first place--kind of like a (well, my) small boy needing to do homework. That's just not good customer service.

I can't believe she reacted like that to a polite request. She works in a SERVICE industry. It is her job. There is no way you were at fault and it definitely was her problem.

This is the bad part about Kindles - no tactile connection and no cover to enjoy.

"When others are mean to me, I always assume I deserve it." As both a practicing Psychologist and a faithful reader and admirer of Dave's writing, I ponder that statement. For many of us, our reflex response to "meanness" is anger, often followed by lashing-out. Would ours be a more gentle, humane society if we all habitually looked inward when others are rude, to see if our own behavior needs altering? Perhaps so, and lashing-out is seldom productive. A soft answer does indeed, often, turn away wrath. And yet, and yet Dave's need for a little extra help in obtaining the cover of his desire is not his "fault", and the salesclerk has no right to be dispensing his "punishment", even if punishment be deserved. What disturbs my heart here most of all is Dave's automatic assumption of guilt when faced with the cruelty of another. I can't help but wonder if he has always felt this way, and how being handicapped may have affected this assumption.

My G-d, at the end of the day, did she really miss those few seconds??? SHE lost out on having a nice interaction. Bet she's crabby to everyone. Or G-d knows, maybe she really was having a bad day. (Not that this is an excuse, but we all do things and later regret it.....

Whether "guilty" or not, introspection is a good thing to have about your societal encounters. By introspection you can figure out when you are out-of-line, or, as Dave correctly realized, not-so. It's called a "conscience".
Great post, Dave.

I can't believe she could be so annoyed at you over this. One thing that I have learned is that often when someone's response to me seems out of proportion to what is called for - it is more about them than it is about me. Who knows what she carried into that situation. Your interaction with her did not warrant such a response. When you think about it - you were merely asking her to do her job!

Dance To The Door said...

I have bought books simply because of their cover art. If there are two editions of a book and they have different covers, I'll buy the one with the cover I like best.

I'm sure someone who works at a bookstore has encountered this sort of thing before, and if your very reasonable request was too difficult for her, then she hasn't had a truly difficult customer yet.

I don't think it was impractical for you to ask for a particular cover. I would have done exactly the same. Actually if both covers weren't displayed I would have asked them if they had any of the other cover in stock, and insisted they get it from the back room. It isn't that I'm normally a pushy person, but I love books. I cherish my books, I display them proudly in my library. While I have some very wonderful books with ugly covers, a wonderful book with a wonderful cover is just that much more well...wonderful!

As much as I try, when others are mean to me, I always assume I deserve it. I analyze all the ways that I 'set off' or caused the other's attitude or distress.

Another course segment for difference 101. It probably wasn't anything you did.

(How is it that so many people are sure 'it', for any known value of it, is someone else's fault - and that there must be a fault involved -, and so many sure that it must be their own fault, but apparently so few people just in-between, equally open to either possibility?)

Besides, the cover you chose is *much nicer.