Bullies, Bigots and Buffoons, Oh My 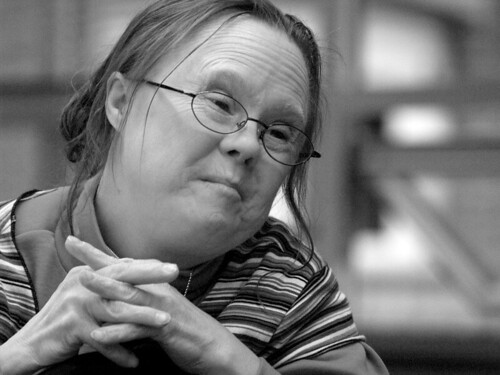 "Abort it and try again. It would be immoral to bring it into the world if you have a choice." That's what Richard Dawkins, a geneticist who is also billed, by Wikipedia as a both an ethologist and an evolutionary biologist said in answer to a question. When asked by a pregnant woman about the the possibility her foetus had Down Syndrome, he responded quickly and, somewhat brutally telling her to abort it. He later, when the predicted flood-gates of protest opened, gave a half apology. In that apology he said:

"If your morality is based, as mine is, on a desire to increase the sum of happiness and reduce suffering, the decision to deliberately give birth to a Down's baby, when you have the choice to abort it early in the pregnancy, might actually be immoral from the point of view of the child's own welfare"

He, wonderful man that he is, worries about the child's welfare. He states later that we have a duty to reduce. He wants to reduce suffering. SUFFERING. Anyone read that survey that showed 99 percent of people with Down Syndrome when interviewed, say that they are happy? But their voices would be discounted wouldn't they. They might have the lived experience of having Down Syndrome - but poor dears, the experience is wasted on them, they wouldn't understand. A person with an intellectual disability is always assumed to be incompetent when they disagree with authority.

Photo Description: Grainy photo of Sandra Jensen, she is smiling, wearing glasses and the sun is shining on her.

Firstly, let's remember that people with disabilities are a wide a varied group, there are poets, painters, actors, activists, musicians and, yes, even politicians. The ideas of who people with disabilities are come from stereotypes when we limited who people with Down Syndrome could be. Remember, always remember, that this is the first generation of people with Down Syndrome who have grown up without being in the shadow of large institutions. The first to experience schooling.The first to experiencing live in the mainstream. Oh, there were brave parents who kept their kids home and fought the good fight to get us where we are now - but it is this generation that is benefiting from that fight.

Photo Description: Edward Barbanell, wearing a shirt and tie and smiling at the camera.

The one think that Dawkins said that I can totally agree with is that we need to make choices that reduce human suffering. Well, I would ask him, how can he make a callous suggestion that people with disabilities are born to immoral parents, (for an atheist that comes awful close to the idea that people with disabilities were born as punishment to sinful parents) and not realize that HE is inflicting suffering.

Photo Description: Stephen Green, after winning his election, looking at the camera satisfied.

There is a simple solution to this. Sit down, meet some folks with Down Syndrome, speak to their families and until you do this, simply, shut up.

In the simple act of shutting up you will increase the happiness of those of us with disabilities and decrease the amount of ignorant and hurtful twaddle that gets spewed about a people who when asked, not by you of course, if they are happy, say yes. When asked if they are suffering say no.

By the royal decree of 6 powerful princesses, we must all reduce suffering by reducing prejudice and ignorance and arrogance.

There's a challenge Mr. Dawkins.
Posted by Dave Hingsburger at 7:52 am

Yes! Yes! And yes! The people I know who have Down Syndrome suffer the most as a result of the attitudes of others. My brother Gerry had an awful life not because he had Down Syndrome but because of other people's prejudices towards him. Mr. Dawkins does not know what he is talking about. He thinks you can just exchange one fetus for another? What is this, the refund desk at some department store?

The other thing I want to add is this - since when is "happiness" the single determinant of a worthy life? And while we all seek to reduce suffering, the truth is that suffering is part of life. Lots of people suffer a lot. But that doesn't mean their life is not worth living.

It is so dangerous when ignorant people like Mr. Dawkins who appear to have some credibility spread their prejudices around. Can we say eugenics, Mr. Dawkins?

‘Sit down, meet some folks with Down Syndrome, speak to their families and until you do this, simply, shut up.’
That’s the way! Thanks Dave!

Love Colleen's point. Who says happiness determines the value of a life? Is that what we tell people with depression or suicidal thoughts?

That's why I can't take people seriously when they defend abortion of disabled fetuses "for the sake of the child; I don't want them to suffer." Well, then, don't have kids. Any of them. Everybody suffers. If you haven't accepted yet that suffering is part of being human, then you aren't ready to be a parent.

Of course we all want to reduce suffering when possible. But how does that not naturally lead a person to respecting and improving conditions for others? What twisted leap of logic takes one to killing the unborn and insulting the living?

(Disclaimer: I'm not saying that abortion is never acceptable in any situation. I am saying that it's wrong to abort one child, when you would willingly take a different child.)

Ethologists are an interesting lot. (So are social engineers and evolutionary biologists.) They tell us what's best for us. Of course - they had to take on new names over the years because eugenics got a bad name (for damn good reason) last century. Not a fan of Mr. Dawkins - nor any of his ilk . . . historical or contemporary.

The worst tyranny wears the face of benevolent concern.

Good Post. Mr Dawkins, UNFORTUNATELY, aligns with too many people (around 90%) who have choosen to abort a baby with DS.

People with DS -or any other disability, need to be seen as people first and foremost, and not labeled with a particular disability.

Thanks for the article

In 2009 at the World Down Syndrome Congress I had the good fortune to share university accommodation with Dylan Kuehl and his family.

Dylan is an artist, writer and musician speaks eloquently and thoughtfully and had done his research on Dublin before he arrived - he also happens to have Down Syndrome.

During an in depth conversation with Dylan I asked him to tell me how he felt as we parents and advocates often speak on behalf of people with Down Syndrome, but I wanted to know what HE actually felt.

So I asked him if he 'suffered' from having Down Syndrome. He thought for a minute or so before he replied, telling me that no, he does not suffer, he has a great life. He went on to say that all he really 'suffers' from is the ignorance of people who judge him, comment on his life and make fun of him.

So I'd like to ask Mr Dawkins, who has the problem here?

I'll respond to Dawkin's comments after I drop my daughter (who has DS), back at her university. She can't wait to get back with her friends, go to her classes, listen to her music with friends, and has she puts it "live my happy life". If that's suffering, bring it on.

I know plenty of non-disabled people who constantly complain about every aspect of their lives, put on martyr shoes, and take so many things for granted. These people, by their own admission, are sad, stressed, and miserable. Yet, I don't see people screaming about "quality of life" or "limitations of happiness" for these people.

No one can predict what someone's path will be before birth. Just because someone THINKS someone else is suffering, doesn't mean he/she IS.

We couldn't agree more!
It's been hard to keep my tongue civil in my comments and blogs on this as well - You did a great job here sharing with beauty and truth. Excellent.

Mr. Dawkins did not particularly make a positive impression on me the first time I heard him speak, either.

I find that he tends to go with what he thinks will provoke the most reaction out of his intended audience. His holier-than-thou attitude really distresses me, as he his often held up as a shining example of a person who can easily translate difficult scientific concepts into plain language.