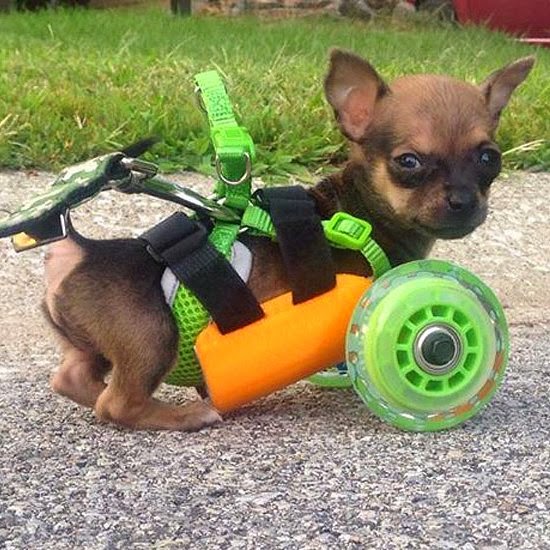 Before I write a single word, I want it made abundantly clear that I love dogs. Like everyone else I saw and read the stories about the dog with the 3D wheelchair, I even ooo'd and ah'd at the cute pictures of TurboRoo. As I read the stories about the dog, I read them from the point of view of a 'dog enthusiast' not from a 'disability' point of view. After all I've written about disabled dogs before. I think that there are lots of lessons to be learned from watching a three legged dog chase a ball. Dogs with disabilities just get on with being dogs. It doesn't seem to even much notice that it's doing things differently it just does things differently. So, as I've written this before, thought this before, I didn't think about it now, reading these stories.

It was only after this picture appeared that something happened that jarred my focus back on to the disability aspect of this whole thing. Someone, a few months back 'slipped,' and made the 'rather be dead than in a wheelchair' statement in front of me about someone else. There were the requisite apologies and the 'I didn't mean that.' Like words don't mean what they say when they are in front of me, but mean what they say when I'm not there. Without question it changed the nature of our relationship. A cooling down of affection I suppose.

So, when I heard her voice on the phone, I was surprised, not that she called, but at the burst of energy that came through the phone. She was calling to ask me if I'd seen the picture of the dog with the 3D wheelchair and how cool it was, and isn't it great that the dog has been given so much freedom. Yada. Yada. Yada. I said that I loved the idea too but that she didn't need to call about it, I had already accepted her apology and she didn't have to demonstrate that 'she didn't mean it.' She was startled. She blurted out, 'this is about a dog, not a person.'

It's cool that a dog has a wheelchair. It's tragic that a human has one.

Then I reread the articles about the dog. Not one. Not one. That's NOT ONE of the stories referred to the dog being 'wheelchair bound.' All the stories talked about the dog having a new lease on life and freedom to move. Look at this headline:B.C. Man Makes Boating Accessible To the Wheelchair Bound. Nice huh.

The Dog Is Free.

I can't understand why, when we, as disabled people, have made it clear that the term 'wheelchair bound' is prejudicial and just plain freaking inaccurate, that it persists so strongly in the media. It's like they like how readers without disabilities react to these words so fuck the concerns of those who actually experience wheelchair use.

So everyone is pleased that a dog with a significant disability is using a wheelchair getting a chance at freedom and a quality life, while parents who kill children with disabilities are 'doing the right thing' or 'doing the understandable thing.'

That's all I can say.

Posted by Dave Hingsburger at 8:13 am

I can't think of a thing to say except WTF.

Thanks for this thought provoking topic

Hmm. Do you think the term "wheelchair-liberated" could gain traction?

People who support medical killing of old, ill and disabled people often say that by euthanizing pets "we treat our animals better than we treat humans." In fact, most non-human animals are euthanized for the same reasons as humans; they are old, unwanted or abandoned, inconvenient or too expensive to care for, ill, incontinent, have behaviour problems, not able to fulfill their roles or just in the way. Millions of pets are euthanized every year because people don't want to take responsibility for spaying/neutering. A cute puppy grows into an energetic, barking dog who needs a lot of attention. Cute, snuggly kittens grow up to be independent cats who may not be allowed in the next apartment you rent.

In the initial video (I think) that started the ALS/Ice Bucket Challenge craze, I cringed when the fellow was referred to as being "confined to a wheelchair." Old language dies hard, apparently.

Might be one of my favorite blogs of yours. I just spent the last two days at a conference for "professionals" who work with individuals who experience developmental disabilities. In that time I said WTF to my husband, more than once. ( in reference to how people were speaking about the individuals they are supporting).
When, oh when, will the human race start to treat humans as "humanly "as we do animals? Disclaimer, I love animals.

Kris S: I am not clear why you would necessarily cringe at the use of the phrase 'confined to a wheelchair'. I have not seen the video in question but it may well be that it is an accurate reflection of how the person with the degenerative disease views the decline in their mobility. In that case it would be entirely appropriate to use, no? For others, I could certainly see the phrase as being both inaccurate and offensive but it really boils down to context and viewpoint.

Wow. That's something to chew on.

I'd like to be educated on what term could be used? I've had to use wheelchairs after surgery, after an accident and for long treks because mobility
any longer than a few minutes is a challenge. I've been asked when requesting a wheelchair, like at an airport, if I am wheelchair bound. I assume it is asked because they wondered if my mobility or lack of mobility has bound me to a chair to get where I needed to go, or is using the wheelchair as needed and being able to transfer or walk short distances an option. Such questions determine the extent of assistance needed. Yes, the wheelchair opens my world, gets me places I couldn't go. My life is unbounded by the increased mobility, but my butt could be bound to the actual chair. If this is such a derisive term, what should we use, and educate others to use? It seems to describe it well and I can't personally see what is derogatory about it. Some use "confined to a wheelchair", which seems to say the same thing. Help...

I do have to say that I'd love a t-shirt with that old cartoon with the guy bounding towards the wheelchair. Lol

You're absolutely right, tigerlily, I have had a wonderful chocolate lab named Rose for 2 years. The vet called and said they were going to kill her if we didn't take her. Her almost 'fatal' illness? She's allergic to cigarette smoke. Quitting smoking or giving her benedryl was too much trouble. Sigh.

Sooooo many times, I'll be out and about in my powerchair, and encounter someone (through age or illness) for whom upright ambulation is a visibly exhausting, frequently sometimes painful effort. Many times, when I greet them, and pass social niceties about how their day is going, they will speak of these challenges, followed by some comment about how grateful they are to still be able to *walk* -- even though it takes so much out of them that they can't do many things they would want to, or can't much enjoy things they *do* manage.

I always take the time (conversational/friendly, NOT lecturing/condescending!) to explain how much I love my chair and how much *less* disabled I am in using it! how much healthier I am, how I can spend my energy where I want to! all of that.

When they say they fear not being able to exercise I explain that having a tool to use when it is needed doesn't mean that they will suddenly be forbidden to walk at home or ever , and that constant pain, disappointment/frustration and exhaustion are unhealthy too -- like i had before my chair!

I think often of Christine Miserando's "Spoon Theory" (butyoudontlooksick.com), and choose carefully what to spend my spoons on.

I try so hard to explain to people who seem like they'd benefit from a chair (or afo/kafo, or etc etc) that appropriate *tool use* doesn't make you more disabled, it just makes you clever. It sets you free.

A beloved friend, many years ago at 19 to my sixteen, said when he looked at me, his imagery was of someone with a broken leg, running as fast as they could *away* from the ambulance and Paramedics who only wanted to help...running scared.

He was right, and I've never forgotten it.

I try to pay it forward, however I can.

Sorry to ramble; this just *really* hit a nerve.

As ever, thank you for your eloquent words!