On our way home from our anniversary dinner, Sadie was walking with me, holding on to my hand, and excitedly pointing out rainbow flags whenever she spotted one. There were lots to spot. Ruby, walking along holding Joe's hand, heard what Sadie was up to and decided to take a more scientific approach and began to count the actual number of rainbow flags that festooned the street. So there we were, two old gay men, walking with children, one excitedly shouting, "There's a rainbow!" the other saying "76 rainbows in two blocks is a lot ... oh, there's 77." 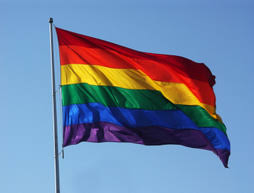 Later when asked what the flag meant, I remembered, having been around when the flag first came into use, that the colours had meaning. I quickly found them and explained the meanings.

I didn't get into the history of the flag and explain that there were originally eight colours, including pink for sexuality and light blue for magic and art. The girls thought the flag was beautiful and they liked the meaning behind the colours.

After the girls went to bed, their ears full of the story Joe had read, the fell asleep quickly. Joe and I sat up talking. That afternoon we'd gone over to Church Street, the heart of the Pride fesitval and we both noted how young everyone seemed. Everywere people held hands, boys with boys and girls with girls and boys with girls - all having fun, gathering in groups talking, shouting out 'happy pride' to passersby. It was fun to see people just having fun. Celebrating. At one point we saw a group of older men, all that we know, sitting at a table on the patio of a bar. We all waved to each other.

One of the men, smiling, opened his arms, indicating that we were to look at the whole thing, not the individuals, but the whole thing. And when we did, we saw what he was grinning about.

That first pride march up Yonge Street, with my heart beating rapidly in fear, was a much different thing. We didn't know it, but we were marching then, so we could stroll now.We were marching then for what we couldn't imagine. And this, as my old friend indicated, was what it was.

Thank you for marching so we can stroll.

Oh, gosh...Defying Gravity said everything, really. Everything that's important and right, in one sentence.

Happy Pride, all! Enjoy the magic!

Thank you for marching, laughing, strolling and counting (taking note of how far we've come is important, too).

I found this video from the Ontario Rainbow Alliance of the Deaf, performing "True Colours" in ASL, and I thought this is one of the best places to share it:

True Colours (by Artists Against Bullying) in ASL

Thank you for marching back then. I cannot imagine how scary that must have been.

Capri Uni I love that video!