A Tale of Two Awards

Last night I received an award from Surrey Place Centre called the June Callwood Award. Before I write about that award, I'd like to tell you of another award, one of my first which I received a lot of years back. An organisation that has a huge conference annually decided that I would receive the 'Pioneer Award' that year for my work in sexuality.  I was thankful and proud to be recognised, both by the agency and at an international conference.

Well, I didn't get my award with the other awards. I was taken, with a small group of people, downstairs from the conference centre and into a restaurant where a table had been reserved way off to the side. There a little ceremony was held over lunch and I was given the plaque. It seemed that my work in the area of sexuality and adult rights for people with disabilities made me to controversial a figure to be acknowledged openly. Did I take the award ... you bet, it hangs in my office to this day ... it was a nice plaque after all. In fact, while this sounds awfully clock and dagger and clandestine, the times were very, very different. I was viewed as someone who was a little dangerous and a little too pushy. Now, years later, I hope I'm still seen that way, actually.

Well, Surrey Place handed me the award after a nice introduction by their CEO Steven A. Finlay in front of the crowd gathered for the ceremony. Mr. Finlay even talked, openly, about my work in the area of sexuality and adult rights. Joe said he was particularly pleased that in the introduction I was called a revolutionary, which Joe said that after living with me through the angry letters, the hateful phone calls and the threats made against me ... was, in his mind appropriate.

So I got the award in public view!!!

Just to prove it happened: 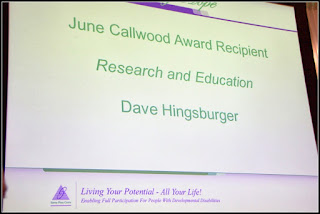 With awards come speeches. I was asked to keep it to two to three minutes and I think I managed. I find short comments more nerve wracking than hour long keynotes. I'd prepared something, had the notes in my pocket, and chose to speak without reference to the notes. Rare for me. I think it went OK. 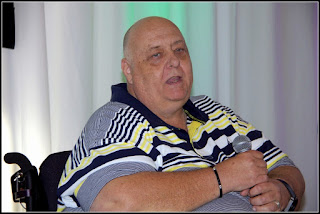 Here it is, the award in hand. Yes that is my tattoo peeking out from my watch strap. 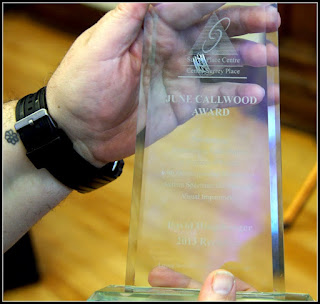 A few friends came along to help me celebrate. From the left, Joe, Rose, Dunja, me, Belinda and Susan. We had a nice time getting together for appetisers and tea before heading over to the hall. 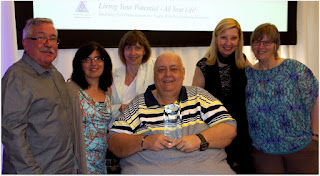 Here's one of both Joe and I, all cleaned up and in new shirts and everything. 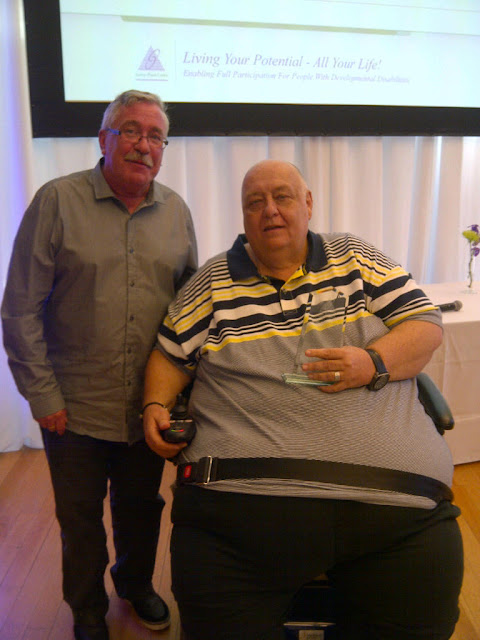 A final word. I was so honoured to get the award, both because it is wonderful to have my work acknowledged and because of the woman it was named for. I met June Callwood many years ago when she was fighting for funding for a hospice for people with AIDS. What happened between her and I is too personal to write here, but to have this award, with her name attached to it, is humbling.

I thank Surrey Place Centre for the award, for their courage in talking about my work in the area of sexuality and for publicly honouring me for work which put me out of the mainstream of thought about intellectual disabilities for a very long time.

I was truly, and deeply, honoured.
Posted by Dave Hingsburger at 5:01 am

Congratulations to you both!

An award deserved and won. Congratulations to you.

Congratulations! Thanks for being a revolutionary!!

"Ya' say ya' wanna revolution"...John Lennon

Congratulations! So pleased to see each time you are honoured.
'A little too dangerous and a little too pushy’- you spoke to our work team a few years ago and people are still talking about it. Too dangerous and too pushy is definately still how you are seen by many in our team who were deeply uncomfortable with the challenging messages you presented.
Vive la revolution!!!

We add our congratulations! So well deserved, revel in it a while won't you?

Congrats! One small step for man - one giant step for mankind. Keep up the good work and savor the victories!!!

Congrats for the third time Dave ( I have tried posting twice already so I apologize in advance if 3 show up!!!)Well deserved!!! You are amazing at what you do and what you inspire in people!!
Mich :)

I just posted on the evening, from my point of view of course! http://whateverhesays.blogspot.ca/2013/06/in-honour-of-dave.html

Congratulations Dave! When I heard you speak, over 30 years ago I was in my twenties and working with adults who had been living in an institution all of their lives. I was hired to help them learn skills to help them transition to group homes in the community. Listening to you was the first time I ever really though about the sexuality of people with more severe disabilities and I remember thinking, "of course, what he says just makes sense". And I have been thinking that way every since.
By the way, you and Joe look very handsome in your new shirts :) You have been instrumental in the way I have been teaching for over 20 years.
Lisa

One question - were you able to access the stage to accept the award?

Very many congratulations. You both look really posh. So many changes over the years making big differences to the way people lead their lives. Still a long way to go but pioneer you are and so say all of us.