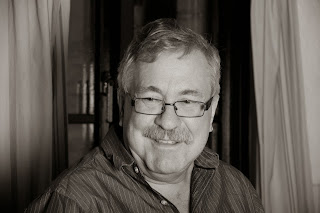 We met when we were 16 and in high school. He is now 61 and I am 60. For two months I will enjoy being the youngster in the relationship. The jokes I make over the next few weeks I will make the same kinds of jokes that I have made for nearly 45 years. Joe will laugh at them, even though he's heard them all before, because that's what Joe does. He finds a lot funny.

I'm lucky that I found someone with both a sense of humour and a sense of kindness. Those two traits make Joe an exceptional person. I was speaking the other day with someone about how relationships fall apart when the spectres of disability or disease raise themselves. When she mentioned this I hadn't even thought that I should count myself either lucky or fortunate. It had never crossed my mind. Joe's just not that kind of man.

He's the kind of man that's kind, and funny, and patient ... and who can piss me off faster than anyone else alive.

He's the kind that Harumphs.

I'm the kind that pouts.

Neither of us do much for our birthdays, we never have, it's hard to think of something special to do when you figure that every day is kind of special - and I'm not being trite. I think we've never taken our relationship for granted because we became a couple when the world demanded that we live as singles. We never had the approval of church or state. We never had to return the extra microwaves, still wrapped in wedding paper. We never listened to those who said it wouldn't, couldn't, shouldn't last. We just made sure it did.

So we'll do ordinary stuff today.

But it will be special simply because he's a year older than me. I'm a year younger than him. And in a relationship like ours, that's fun enough.
Posted by Dave Hingsburger at 12:00 am

(Beautiful and affectionate portrait; the fun's in the small stuff.)

May it be a very special one, one of many more.

A very happy birthday to Joe. May you continue to give the gift of love to each other - for all the years of your lives.

Happy birthday Joe, you both sound like you are in the right place with each other and have always been there, enjoy your day.

Happy Birthday to Joe. I love hearing about hoe Joe is now a year older than you, although briefly. My wife is a year older than I am for four months and four days. She is reminded of this quite a bit during that period.
Enjoy the day!

Happy Birthday, Joe! So happy to have met you and appreciate your wonderful sense of humour!
Susan Goharriz

Happy Birthday, Joe. May it be filled with happy surprises.

Happy Birthday Joe! Watch out for that youngster you're hanging with! We used to love talking to you when you and Dave came to Maine and we miss seeing you. You really are the wind beneath his wings. Enjoy your day, chuckle (or harrumph) at the jokes, and quietly celebrate you.

When Dave gave tribute to your sense of patience and kindness, he forgot to mention what a handsome dude you are. ;^)

Happy birthday, Joe - I hope it's an extra-lovely day. I didn't know you two were high school sweethearts! Love that!

Happy birthday, Joe! You and Dave are so lucky to have found each other!

Happy birthday Joe! Enjoy a nice piece of cake (only if it has good frosting - bad frosting is not worth it) Don't let being the old guy in the room get you down, in just a few weeks you will be young again.
JamieLynn

A big happy birthday to my fav uncle! Hope your having a great day and lots of laugh's,i can hear you two now! Sending our hugs and love from campbell river! 61 is the new 31 you know! Love from jennifer,daryl,kyle and jessica! Xoxoxo

Happy Born Day Joe!
I love your post more today than I would have last week. I just married my partner of 11 years. We have known each other for 27 years and met back in the days where we didn't talk about it. Times they have changed! I can now yell out loud that it is my wifes birthday...she too is a year older than me for only part of the year. (the best part)

Enjoy your day together!

Hey Joe, happy birthday. We share this day of our birth.

Happy birthday Joe, you and I share this day, albeit, a few years apart, lol. Have a great day.

Happy Birthday Joe! I can still hear your laugh.

Perfect reasons for recognizing the commitment that couples can make whether it is formally recognized as marriage or not. What a nice birthday present for the older and therefore wiser one.

My best wishes and wishes for many more

Happy "B" Day Joe. I hope cake & beer are in the forcast.

PS. my only cousin from my fathers family side is three weeks older than I am. When we were younger I always envied him for this three weeks. Now he envies me for being younger :-)

Happy birthday dear, dear Joe, who by those regular surprised looks mixed with pure delight, seems not quite able to believe that I could say some of the things that regularly pop out of my mouth, but accepts me just the way I am - with a gentleness that is heart-warming. You're an awesome bud! Have a great day!

Happy Birthday, Joe.
Since you are the one celebrating your birthday, I think it would be quite proper to keep celebrating until Dave catches up to you!
Enjoy the day...month!!

Happy Birthday Joe! You two sound just like my SO and I, perfectly suited, with all the bubbly little bickery stuff on top and a deep solid relationship where two *have* become as one beneath.

Enjoy your day, and many more.

Happiest of Birthdays to the lovely and talented Joe Jobes. Beautiful tribute to him and to Making It Work, Dave.

If I had lots of extra funds I would totally send you guys a microwave, wrapped in tulle. Congratulations on so many decades together as well.

Happy Birthday, Joe! You've done quite well for yourself!

Happy Happy Birthday Joe!!! As someone who has been with their significant other for over 20 years as we were high school sweethearts too, I love hearing of similar situations!! As much as Carl drives me nuts, I love him even more!! Thank you for a reminder to appreciate what I have!! And Joe, seriously has the best laugh ever!!!
Mich

Happy Birthday, Joe! I think the ability to make your partner laugh is part of the glue that holds any relationship together....you and Dave seem to have a real good thing going.

I get it Dave!

I too met my husband when I was 15 and he 16, almost 35 years ago! We are friends first and for most!
And like you said Dave, we still make each other laugh a lot!
Enjoy what ever you do today!