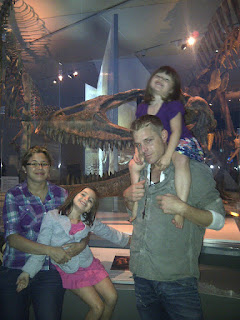 Yesterday, early afternoon, we headed out, the bunch of us, to dinosaur at the Royal Ontario Museum. There's nothing like rambunctious children and constant chatter to focus one's mind on things other than cares, concerns and issues. We went through part of the U of T grounds and I noticed Ruby come to a complete stop. She was momentarily in Ruby heaven. She loves seeing buildings covered in ivy. She has since she first noticed a building wearing a leafy sweater. In front of her, stood a prime example of nature's knitting. She immediately began asking questions. We explained a bit but as it was possible, Joe walked her right up to the building and they carefully pushed through the leaves to see the vines.

I had scooted ahead and found a tender tendril reaching out across the brick looking for a place to grab hold of. It was so young you could see where it had finely attached itself to the bumps and crannies as it continued to reach forward. When Ruby came near, I called her over. I showed her the very young stalk of ivy and showed her where the young plant was gripping on the rock. She reached out and touched it, very carefully not wanting to disturb it. There was awe in her eyes. This, to her, was fantastical. I had her feel the roughness of the rock and got her to point out where maybe the ivy could find a foothold. She was completely engrossed in the looking, the feeling and the experiencing. I love moments like these.

I'm figuring, she got it right.

You?
Posted by Dave Hingsburger at 7:16 am

Out of the mouth of babes. Can't beat the insight of a child. Sounds like a perfect time.

Perfect - love those Ruby moments! Thanks for sharing.

Ayup. Ruby takes it all in and her brain comes up with gems as beautiful as her namesake.

This is so sweet to read. She sounds like a great kid. I'm glad she got to have such a great time.

I love that you used the "word" fantasical, it is one on my faves!!