What I Thought I Saw: A Remembrance Day Blog 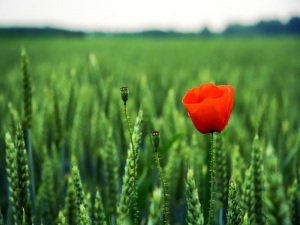 (photograph of a lone red poppy in a field of oats)
We went to the War Museum in Ottawa a long while back. We'd been to the one in London and the one in Manchester. We'd toured the various displays, we'd seen what was set out to be seen. But once, we saw more.

Here's some of what we'd managed to see, feel and experience:

We sat, huddled together with other tourists, in a recreation of a London Bunker, as it shook, and shook, and shook us - the very floor trembling, the sound of bombs falling blasted through speakers. We all tried hard to engage our imaginations, to feel the fear and the terror and the mind numbing endlessness of the minutes sat in darkness.

We rode through a recreation of a trench, luckily made wheelchair accessible, in Ottawa. Again we engaged our imagination. Each of us looked up cautiously, as if we would soon see shots fired cross the top. The earth seemed so close, the trench just couldn't be deep enough for us to stay even 'pretend' safe.

We visited the 'Animals at War' exhibition in Manchester, we were moved both by the tales of gallantry and courage of the animals as they died saving mankind. The most difficult picture to look at was a portrait of a dog, a photograph taken sometimes before the dog died in violent combat. The eyes looked out, not as dog eyes do, but instead completely tired. I'd never seen such hopelessness in the eyes of an animal before.

Ottawa was the last of these museums we visited. It's wonderfully done, brilliantly laid out. It tells story after story about loss and bravery, about love and combat, about hope and desolation. But mostly it tells the simple story of violence. I like going to these places, I like being reminded that my freedom is not a gift but a duty. I like being reminded that others fought and died, so that I might have a free voice and with that voice comes responsibility.

On our last visit to the museum in Ottawa, I realized that I had seen an exhibit not planned. An accidental display not curated by someone, not designed and set out for our education and edification. I asked Joe to excuse me for a moment and I rolled back. I was in the hall where they display the machinery of war. Tanks, planes, huge guns, imposing creations, with frightening efficiency in their lines all sat silent amidst the chatter of children and the shushing of adults. I rolled up close to a small tank. Just a very small tank. I looked closely to see if I had seen what I thought I saw. If my mind had mistakenly called me to go back. If the birth of a small hope in my heart was mistaken. Would it be there? I was sure I was wrong. I often am in these moments when poetry takes over from reality. But no. This time I had seen what I'd seen. It was there. And it mattered. On the treads that ran over the wheels that gave traction was something utterly beautiful.

Dust.
Posted by Dave Hingsburger at 12:16 am

As a person who thinks of herself as a pacifist I always have trouble with Remembrance Day. Am I grateful for the sacrifices that have given me the incredible freedom that I have - absolutely. My Dad, my uncles - all fought in WWII. But my deepest wish is that we find another way. That somehow humanity finds a way to leave violence behind. We are so far from that right now - light years away. But thanks for that image Dave of the tank with dust on its treads - maybe someday all the weapons of war will be covered in dust.

Colleen took the words from my mouth (or should that be, "from my fingers"?)

I loved the lone poppy. Beautiful.

I loved the call to remember, but long for peace "one day."

No one who goes to war comes back without scars that last and live for a lifetime. It is a brutality that no one should have to endure, but is endured to prevent worse brutality. The scars are passed down to the next generation in so many ways, but also the deep gratitude that flesh and blood stood trembling in the way of mortar and metal against hatred and violence.

As a dog lover, I was moved by the description of the dog with tired eyes.

reading your post just made me cry very silent for a while...

Thank you Dave. May dust also cover our hurtful words and actions with those we love --unintentional or otherwise. I think of you often as a peacemaker extra-ordinaire.