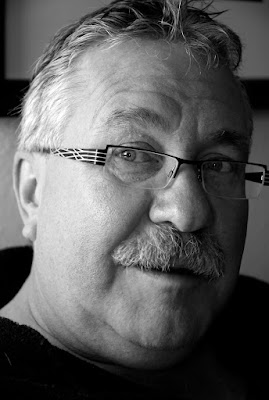 Officially now, and for a whole two months, he is older than me.

I'm not going to get maudlin on you, it's not our way, it's ... unseemly. It's NQOCD! I'm wondering if any of you know what that means. Perhaps some of you from the UK will know the term. Long, long ago we had a friend who'd lived in London for years. She would say, cryptically about someone or something that it or they weren't NQOCD. Finally she acquiesced to our begging and told us that it means 'Not Quite Our Class, Dear'. We fell about the floor laughing.

And that's kind of how we've spent our lives.

I remarked to myself a few days ago about our NQOCD life. We had stopped at a duty free shop in the middle of nowhere just a few feet from a border where the guards saw maybe three cars a week. Loot was in the car and we were hungry. We pulled out from our cooler the left over tofurky from Thanksgiving and made a couple sandwiches. We chatted as Joe leaned his hip against the car and I sat in my wheelchair. I thought to myself, 'Gotta love a guy that loves a picnic.'

But I'm not getting maudlin.

I remarked to myself a couple of days ago while working on the computer here at my desk while Joe watched Turandot on DVD how nice it was to be able to share time and space with someone both involved in other things but both doing something together at the same time. I thought to myself 'Gotta love a guy that you can just 'be' with'

No, I'm not getting maudlin.

Today, I've got a whack of things to do for work. We are travelling a lot and the demands are high. But it's Joe's birthday so we're going out to a 5 hour opera!! Yikes. Joe has been worried sick about how we are going to sneak food into the theatre. It seems that my diabetes means that we have to have snacks for two to nibble on during the performance. I thought to myself as he put his diabolical plans together to sneak in some awesome old cheese and some way low carb crackers, 'Gotta love a guy who thinks diabetes is fun and that wheelchair bags are the perfect place to stash loot.'

I'm afraid that our friend, long past, must be looking down at us and saying that we still are NQOCD.

And she'd be right.

Thank God.
Posted by Dave Hingsburger at 12:03 am

Happy Birthday Joe! I love that picture of you.

Happy birthday Joe. Hope you do manage to get food in!
Have fun!

If I had confetti, I would throw it!

My husband and I are mere pikers compared to the two of you, having only been together for 30 years. That said, I entirely agree with you about the pleasures of sharing quite time and mischief with the comfort of a very long term relationship.

Enjoy the opera and your snuck in snacks!

Happy, happy birthday Joe! I love your picture and have a great time at the opera!
Lisa

Happy birthday to Joe. & It's not "maudlin" to get emotional over strong feelings.

What a beautiful photo! Happy Birthday, Joe. Enjoy the opera - it sounds like a wonderful way to spend your birthday!

Great picture, Dave sure is lucky.

Joe have a wonderful birthday!

Happy Birthday Joe!!! I love your laugh. Great pic, and hope you have had a great day:)
Michelle :)

Happy Birthday Joe. Hope you both had a fabulous time together.

Happy Birthday Joe.
Dave, I love the NQOCD. I'd think that no matter how you look at it...you're in a class unto yourself. That is why I love reading your blog. It's a great feeling to revel in your own difference and you often remind me to do just that. Thank you.

Happy Birthday, Joe! I hope you had a nice celebration and have many more!