Hats Off to Ruby 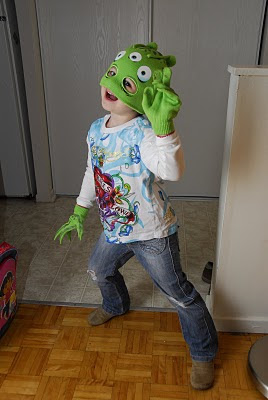 I had a lot of time to think today. I waited nearly two hours for WheelTrans to pick me up. For the first 40 minutes or so, I enjoyed the wait, it was even productive. I was downstairs at work and chatting with some of the staff that were taking a smoke break. Things turned to work and it was OK because it all seemed so much easier, so much friendlier being outside in the sun. But they eventually left and I eventually began to grow restless with the wait.

My mind turned to the last time I saw Ruby. Joe and I had bought her a green space monster Halloween touque and she just loved it. She had worn it to school and all the other kids loved it too. She told me that they all wanted to try it on but that she didn't let them.

I began to talk to her about sharing and then decided to simply shut up. She at that moment was really enjoying talking about the scary hat and I thought that lessons about sharing could wait. Truth to tell, I figured in a 'grandfatherly way' ... 'right now I'm just loving her love the hat we'd bought her - let her parents do the moral training'. Normally I'm more motivated than that for little life lessons but sometimes it's fun just to be fun. So that's what I did.

A little later her dad talked to her about sharing and Ruby looked at him like he had the 5 eyes. But she paid attention even though her face was set to 'off'. I began to think that I should intervene and say something too but again decided to just let it go. Now it was kind of an instinct thinking 'I'm not getting something here.'

As I thought about it sitting and waiting I realized two things. First, I'm really pleased that she can stand up to peer pressure and simply say 'no' when she doesn't want to do something, doesn't want to share something. Second, the touque is such that you pull it down over your face and cover your nose with it. I don't think I'd WANT to wear it again if it made the rounds of 20 other kids. Could you imagine the build up of child slime on the inside of the hat. If I'd been thinking clearly, I'd have realized that the hat, in the way it was constructed, made it kind of a 'private' thing that you DON'T share with everyone. As it turned out she let them all touch it, pass it around and look at it, she just wouldn't let them put it on.

I realized that sometimes I'm so anxious to instill my values that what I would end up instilling aren't my values at all. Knowing when to shut up may be the most difficult thing to learn for a parent or care provider. Knowing when to let go and let the other person make a free and independent decision without fear of lecturing, moralizing or correction - is a skill.

I'm glad that I just kept my mouth shut.

I got home and Ruby called to tell us she'd got her Halloween card - complete with a bit of money, which she promptly told me she was going to share with her sister.

What a wonderful story! As a new Mom I am sure I have many years ahead of me of wondering when I should just shut up as well :)
-KR

i'm sure miss ruby has been told in school NOT to share hats or hairbrushes.

its a good way to come home with head lice. i know that one ENTIRELY too well. we finally decided to clip the boychild's hair VERY short to make the comb-out easier.

Generally I do not post on blogs, but I would love to mention that this post extremely forced me to try and do therefore! really nice post. thanks, here's a similar subject you'll like [url=http://blogtext.org/corina33/article/221532.html]Vintage stuff[/url]

Anonymous 2, I couldn't get that link to work, could you try again?

miss kitten! Head lice! I'm scratching at the ides of it ... of course ... I've never had the pleasure of the little visitors and hope the same for Ruby.

EWWWW, my first thought was head lice too MIss K!!!! Good for Ruby!!

Good for you to work that through, Dave. We are so quick to make sure our kids get the sharing thing that we forget that it's not always necessary to share all of our possessions, especially the ones that are precious to us. They are OUR possessions after all. Ruby was creating a boundary and I think that's awesome at her tender age. Thank you for supporting parents to understand that sometimes the issue is bigger than it looks like. What is the message if we force our kids to pass around the things that mean the most to them when they don't feel comfortable doing so? I'm all for teaching kindness and sharing, but I also realize that we also need to let our kids know that THEIR feelings are important too. I'm also creeped out by the sharing of head/face covering clothing items, so "good on you, Ruby".

great post and timely too, Last night I read my 5 and 3 year olds a book on sharing. In it it talked about sharing snacks with your friends. My older girl who is in school this year was mortified, saying ' Oh no, you NEVER share snacks" I like you felt like I had to give a lesson on being nice, etc, but then I thought, ask her why not? Turns out in a world of food allergies, they are taught not to share food at school. I hadn't thought of that but now I am glad I did. Good thing I listened to her too. Kids do sometimes know best!

Love the picture of Ruby,what a natural.She looks like alot of fun. Seeing her picture was a nice way to start a Friday! I too often find myself, saying nothing, but often, saying nothing, becomes something. I have three adult children, all doing well for themselves and for others. We are told, you have such great kids. I attribute this to many things, but one of them is saying little. Giving golden silent time in the midst of issues, allows that other person to think for themselves and once I hear the answer that I support, I praise them for being so wise. I agree, it is a hard skill to develope, but the rewards are wonderful. Enjoy your weekend.

Sorry but my first thought was head lice too - never share your hat unless you want a lot of new little creepy crawly friends :-)

I hadn't thought of the snot factor - but there is another good reason not to share.

Love the photo of Ruby - she looks like she is lot of fun.

I have to agree with Ruby. I also want her to know it's okay not to share her lipstick (Seriously! Women will ask.), and her glass of milk (Because, that's just gross).
;-) Hahaha, I made myself chuckle!

Thanks for your comments today. I sometimes worry about sharing too many Ruby stories here, but she is part of my life and I like sharing all the parts of my life here on the blog.

My favorite so far is still the one where she goes, "Dave ... Dave -- mine!" and comes running up to you for a hug.

Even if the hat didn't go over the nose, she shouldn't let them try it on. That's how lice get spread.

Ruby is a sharp little lady.