Dreaming During the Day 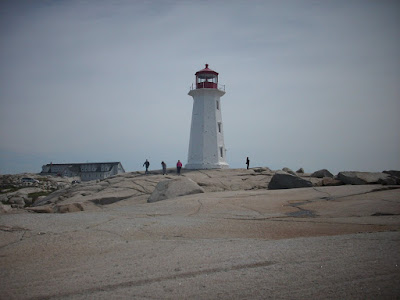 Finally the sun came out in Halifax and we spent some of the day doing touristy kind of stuff. We went to Peggy's Cove and drove along the ocean. Being B.C. boys we both miss the smell of the surf so even though it was still coolish in the morning we drove with the windows down. I was extremely quiet and Joe respected my need for time to think. 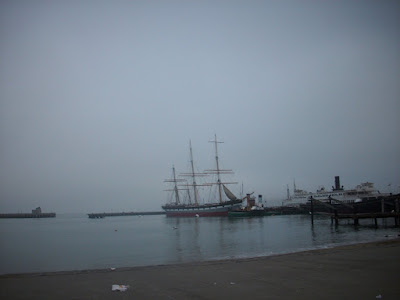 A tall ship from Chile had arrived in the harbour so we went for a quick look. Joe always gets a swashbuckling look on his face as he daydreams about what it was like to sail the seas in these big beautiful boats. I too marvelled at it but was distracted. 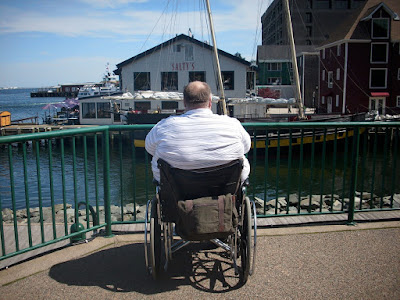 So I spent a great deal of time sitting outside and thinking. After breakfast with Deb Seaward my hostess for the self advocate day I'm doing tomorrow (today as you read this) she told me a bit about Marcy Moses. The day is being held in her honour and is inspired by her life. Marcy is a woman with Down Syndrome who would have celebrated her 22nd anniversary this year as a very married woman, she left behind a husband and a family who mourn her dearly. She left behind a community that misses her. Money was donated in her memory from so many different sources and when it was discussed how to spend that money, it was decided to do a day with self advocates, for self advocates about the power of dreams. Marcy had dreamed big and as a result of her dreams she lived a life unexpected. 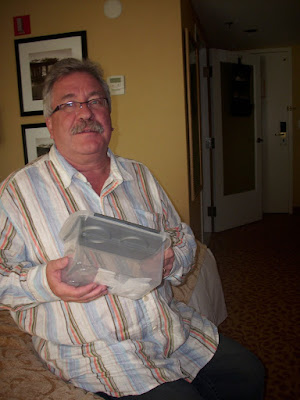 I always take my lecturing and teaching seriously. Very seriously. Even though I use humour as a teaching tool, I'm very earnest in my ambitions with what I do. I felt the weight of the expectations on me as I prepared. In the end I have created a 'Dream Box' that I'll be using tomorrow in my teaching. It's new to me and idea I had while sitting and thinking about a woman who, though borne into a world with small minds managed to live with a big heart. I can't imagine the sorrow her husband feels. But I can imagine the importance of tomorrow.

Marcy tomorrow's for you.
Posted by Dave Hingsburger at 1:24 am

BTW, "B.C. Boys" (make that Boyz) would be a great name for a rap duo, if you and Joe ever had musical aspirations.

I love B.C. My favorite place in the world.

I will be thinking about Marcy today.

She led a purposeful life. One cannot do better than that.

Dave
I knew Marcy for twenty years. Your thoughtfulness about the dream box is great. Marcy would have got it right away because she lived her dreams, big and small, everyday. We do miss her smile everyday and try to honour her memory by helping those we serve to identify and fulfill their dreams. The workshops today were a great tribute to Marcy's memory and a great way to spread the message.
Thanks!
Michael

I love the new name and new look. Now would that be apple pie? :)

Hello, This is my first time visiting here. Your blog is a nice,I thought I would leave my first comment. :)