The Necklace and My Moment 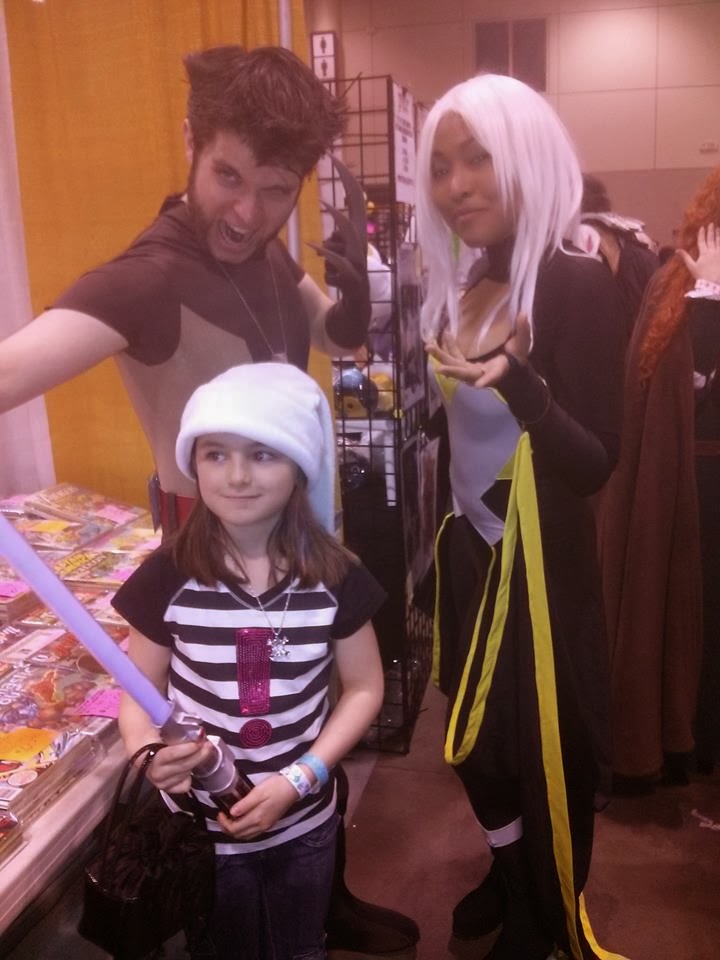 (Photo Description: little 7 year old girl carrying a light saber and wearing a skull necklace poses with a man dressed as Wolverine and a woman is dressed as the character Storm.)

If you look at this picture carefully, you can click on the picture to make it larger, you will see that Ruby is wearing, around her neck, a necklace. It was purchased at ComiCon here in Toronto, the event during which this picture was taken. The necklace is a pendant. The pendant is a silver skull and crossbones and their are 'rubies' encrusting the skull. It's cool. It's cute. It looked great with Ruby's shirt.

Some while later, Joe had gone to find a place to sit, his 61 year old feet were a bit tired. I stayed with Mike, Marissa and the girls. Ruby grew thirsty and asked for something to drink. Because we were in a crowded area, Joe took the bag from the back of my wheelchair so I'd have more space to turn around. In that bag was a bottle of water. I suggested that Ruby and I go, find Joe, so she could have a drink. That was settled.

We took about five minutes to find him, Ruby downed a huge drink and then wandered a little bit in the area right in front of us. Soon she was back and said, "Can someone take off my necklace?" Joe busied about taking the necklace off.

I asked her why she wanted to take her necklace off. She held the pendant up and said, "This will hit me in the face when I do cartwheels."

To hell with pretty.

To hell with sparkly.

To hell with rubies.

I said to Joe as she began doing cartwheels, in the empty space around us, 'This is my International Women's Day moment.' Even though Spiderman and Wonder Woman and The Hulk and R2D2 came through the area, some people stopped, to watch a little girl, just joyously doing cartwheels. No costume. No disguise. No sparkly necklace getting in the way. Just a little girl joyously doing cartwheels while a pretty necklace was stored in Joe's pocket awaiting a time it could be worn without getting in the way.
Posted by Dave Hingsburger at 6:27 am

Thanks. Made me smile. Stories about Ruby (and Sadie) are a great way to start the day.

Perfect start to my day!

Ruby is such a neat person!

And to help with your comic book education - the woman in costume is dressed as 'Storm' :)

Celine! Thank you for identifying the costume the woman was wearing. I've added it into the photo descriptor. I had no idea.

Where did Ruby get that tee shirt? A pink sequin exclamation mark!! That's just so bold for little girl clothing. I really would like to see if I could get it for my little one. Could you ask Ruby's mom and dad?

I never did manage to learn how to do a cartwheel when I was younger and still interested. Great that Ruby can and that she likes doing them!

Ruby (and Sadie!) stories are always such a delight. :^)