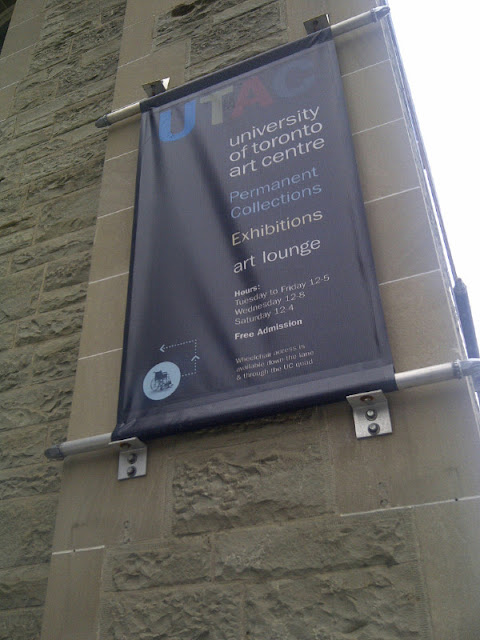 When we looked up the University of Toronto Art Centre it said that it was wheelchair accessible. How I wish they would tell you if you had to go in a separate entrance. I think that if you have to use a back door, or if you have to go by garbage kip, or if you have to go over uneven surfaces, you should be told. I like to make an informed decision. In this case, I wanted to see their exhibit on Peruvian silver, I would have still gone. But, I like to be forewarned.

We got there to find this sign indicated that wheelchair access was round back. What stunned me though was that they didn't use the universal wheelchair symbol, you know the one on parking spaces and bathrooms, and instead chose to use a picture of an old, black, medical looking chair. An empty chair at that! I was stunned. This is an 'art centre.' presumably they know that art has the ability to ennoble and that it has the ability to denigrate. This image is so utterly medical that it speaks of institutions and frailty and ill health. I know few people with disabilities who use these chairs, other than those who have to because they rented one from a medical supply company or they are using it in some kind of public place.

By the time we came in back, up a ramp which was almost completely blocked by a bike attached to it, by the garbage and through a fence that, if Joe wasn't there to open, I would not have been able to get in, I was a bit in a mood. So, I protested. I was told that my feedback was welcome. Yeah. Thanks I suppose.

So I started the tour in a foul frame of mind. Joe was annoyed at me being annoyed. However, we did what we came to do. We saw the show. It was good. We chatted about what we saw, I called Joe to see this, Joe called me to see that, we talked about what we saw and what we read. I enjoy museums. I do. They feed a part of my soul that can get, quickly, undernoursihed. We left in a much better frame of mind.

On the way out the woman who I had complained to asked me to explain to her what I didn't like about the picture of the wheelchair. I told her. She listened. She said she would pass it along. I think she will.

But ... listening and doing are different things aren't they?

I now refuse to be grateful for the one unless the other follows.

'Accessible' should mean 'welcoming,' rather than 'okay, we will let you in if you really insist.'

You shouldn't have to go through the back door like the deliveries and the trash removal.

There are supposed to be regulations and laws to cover all these situations - but it wouldn't be necessary if the architects and designers did their jobs.

And the laws are honored so mean-spiritedly. I find I have to walk long distances out of my way (with the walker) to get to entrances with ramps - and since I have CFS as well as difficulty walking, it's almost not worth it some times.

I'm glad you spoke up - and glad you enjoyed the exhibit - but sorry the whole thing cast a pall on your outing, which would be difficult enough normally.

There are few things as infuriating as a Handicapped elevator that doesn't work! Except maybe personnel that have no idea what to do about it.
ABE

It's also so unnecessary and simply a matter of people not prioritising funding for accessibility. There is a refurbishment of a beautiful old church in Edinburgh, now a theatre, going on at the moment. They are creating a beautiful ramped access, to the front door, in original materials that when completed will simply look like the original builders of the church many centuries ago were extremely forward thinking.

Last time I was in Vegas I rented a scooter rather than a chair. Hey - what happens in Vegas...I was shocked and dismayed at the accessibility of the 24 hour town. Like the exhibition - most of the handicapped entrances were at the rear of the building; or off to some obscure side; or just one door not clearly marked. Now in Vegas, going around back is no easy feat. You could literally go 1/2 mile to get there. If you wished to take an elevator on the street to access a pedestrian overpass - you had to go way out of the stream of things - and quite frankly, the access alcoves were a little seedy - offering a tuck-away for those resting from begging. It was disconcerning to make your way through the crowd to get in an elevator.

Folks in chairs or scooters spend money too. It is so tiring to have to fight to get somewhere - those that have to struggle the most have to struggle further. Sigh...I hope you made a difference - but you shouldn't have to.

Your post reminded me of an issue at my workplace.

I have moderate asthma. In my past, my asthma was considered life-threatening, type 1 brittle asthma. Thankfully, I was one of the roughly 1 in 2 asthmatics who finds their asthma lessens in severity with puberty. But I remember days being chased around the gymnasium by my gym teacher until I turned blue and collapsed because he thought I was lazy.

A few months ago, I complained to the vice president of my university about the scent policy on campus. Some scents don't bug me, but some make my lungs trap air in my chest so it feels like my chest is going to burst and that I can't get any fresh air in or stale air out.

I only started feeling gratitude towards him (despite his assurances that Changes Would Be Made - yeah, sure, I've heard that before and I'll believe it when I see it) when I noticed a prof take a student aside last month to explain the scent policy and that the student's cologne could make other students and university employees very sick.

It's sad that those with disabilities and chronic illnesses live in a world where we can't take people at face value when they say they'll do something. If my non-asthmatic colleague asked for something to be changed, they'd change it if they said they would. In cases of accessibility, it seems it's easier for them to say, "Sure, we'll comply with the law and change it!" and then reply, "These things take time," or "It got lost in the shuffle," or "We don't have the budget for that," or some other excuse when someone calls them on the fact that they promised it six months ago and it's not exactly difficult to do.