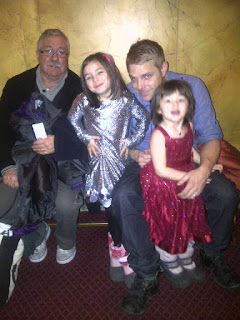 Sunday was a day for a family outing. Mike, the kids, Joe and I went to the theatre to see a Christmas panto called Snow White. Going to the show took the entire weekend. On Saturday the girls went to get their hair done. Sadie kept saying, "I'm not going to cry," when she talked about getting her hair done. Later she determined that she was going to tell Bill, the hairdresser, that if he was going to was her hair he needed to use water, not just soap. We agreed that she would give him instructions on how to wash her hair. She nodded her head decisively, pleased to now have control over what was going to happen. Bill looked amused as she gave him instructions but got right into it, asking her both permission and direction all the way through the wash and cut.

Ruby got her nails done while Sadie got her cut, then they swapped places. Ruby loves getting her hair done and agreed, reluctantly, to her mother's wish to have her hair cut a little bit. She likes and trusts bill so she sat back and relaxed as he did her hair. She falls almost into a trance when she gets her hair done but she did agree to a picture just as she got into the chair.

So with hair and nails done we went home and did some cooking. The girls really got into decorating their gingerbread people. Ruby was insistent that her's was a girl. They robbed some of the marshmallows from a box of Lucky Charms to add to their choices in decorating the fine fellows.

Sunday morning involved all getting dressed up. Well, that's not entirely true. The girls got dressed up and the rest of us guys just got dressed. We all figured we made a fine backdrop for the two elegantly dressed girls who made their way with us to the theatre. 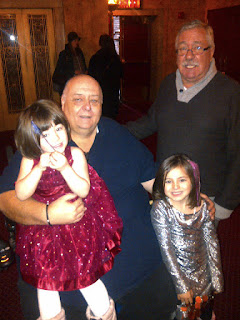 It was a wild and wonderful time at the panto, we got there early anticipating that there would be a problem and it was, with one small hitch, virtually problem free. It's an old theatre so they have to take out some seats to make room for the wheelchair and they installed a kind of wooden platform for me to roll up on, which was great because otherwise I would have sat on a slope the entire time. From where I sat I could easily see the faces of all those accompanying me. I saw Ruby laugh out loud at the sight of a toilet seat on stage. I saw Sadie dancing to a rousing version of  'Firecracker'. I saw Mike burst out laughing at the 'Luke, I am your father,' line and I saw Joe rolling around in his seat - he's a good audience for a comedy. From my vantage point, atop my wheelchair, atop an installed floor, I saw it all.

What was the slight hitch that we experienced?

I'm not going to tell you.

I'm not going to write it down.

I choose to remember what we laughed about.

Because that's what I want to think about when I think about the girls first night out at the theatre.

(Should Ross Perry ever read this, I want you to know that you've added a new phrase to our lingo with the kids. On our way out I was joshing with Ruby about something and I said, "Hey, watch out or I'm going to go all Evil Queen on you." Ruby laughed so hard I thought she was going to fall over. It's now part of our lexicon.)
Posted by Dave Hingsburger at 12:00 am

Dave,Joe,Ruby,Sadie,
it was so nice to hear from your experiences.

Its a little bit like one of the TV-Spot für (forgot either for apple or coffeinated lemonade) that makes one feel so much better.

Have your selves a merry little Christmas :-)
Julia

It sounds like a great time was had by all. And you are right - one minor hitch is not worth the time to write it when you have all those wonderful memories.

It sounds like you all had a very big weekend. Loved the pictures. Made me smile, which is a good way to start my day.

Oh, how lovely. Great pictures! Brings bck memories of taking my neice and nephew to the Panto. they still talk about it!

I'm so glad you had a fantastic time! I've removed some of those seats in the past to put that damn platform in. I say damn, because it never fits properly.. I hope that your chair went over the bump OK!

On behalf of the Crew (and I can speak for 'em, I've worked the Panto in the past, and been a 'hand in that theatre many, many times), I'm really glad you had fun and laughter, joy and warmth.

OK, I'm American so what is a panto? All I can think of is pantomime.

Love the Evil Queen line and all the photos of the girls. Sounds like a lovely time!