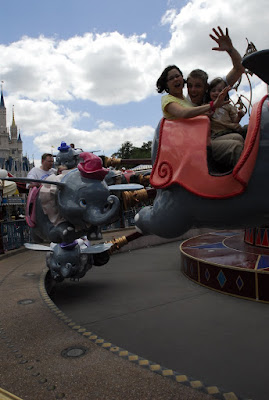 We were waiting, in the hot sun, for Mike, Marissa and Ruby to nagivate the incredibly long line that led up to the Dumbo flying ride. Joe, who's face always has a slightly reddish hue, began to radiate the heat we were sitting in. I told him that night that I felt like I was going to bed with Mister Tomato Head. Anyways the reason we were sitting there was that we had the family camera and there were pictures to be taken of Ruby's first flight!

Joe saw that they were next up so he went to get into a position to take a photograph. I watched the current ride and saw a small boy, sitting cuddled up with his mom. He had his hand outstreached feeling the wind as it raced by, a delighted yelp left his lips. I swear I saw his mother cry. It was a lovely moment amongst many. I noticed him get off and only then saw that he was blind being expertly assisted by his mother. I understood now the sudden source of her tears and felt them myself.

They passed by me on the ramp down from the ride and I smiled at him. It didn't matter that he couldn't see me, I was convinced that a boy who could read letters on the breath of wind with his fingers would feel the warmth of my smile as he passed by. Then I noticed Ruby running along picking out the elephant that would take her to the skies, I saw Joe readying the camera. He gave me the, 'How in hell will I get this shot look.'

They flew by and Ruby, just like that little boy had her hand out, she too squealed delightedly as Dumbo soared to impossible heights. I wondered, wistfully, if she one day would bring her little girl here. If she would wonder at how small the ride had become over the years. Because now, you could see clouds in her eyes. She got off and took her Dad's hand as they made their way to the ramp.

One of the parents, with a small child, was loudly complaining to her friend about how stupid it was to have had to wait for a blind kid to ride on the rides. 'The lines are long enough,' she said loudly figuring all would agree, 'Without wasting them on kids who can't enjoy them.' She was surrounded by a sea of hard faces. Everyone who heard her was glaring at her ... she, to her credit, noticed and toned down a little.

I could write here about 'who was blind' but I hate that kind of statement as it still casts blindness as a negative state. I wonder though, not at the smallness of people's hearts but, rather, at the smallness of their imagination. It's a failure of imagination to not understand how a blind child could feel flight and experience joy. It's possible that that hand, outstreached, was touching the very face of wind. How cool is that? How incredibly cool.

I'm guessing that that woman colours all of life with simply one crayon - and that is something that I truly pity.
Posted by Dave Hingsburger at 1:48 am

I really have problems valuing people with attitudes like that. I just want them to go away and live in a closet.

I guess I don't really value diversity as much as I think I do.

A beautiful post, and so true. As a child those kinds of rides were my favourite, because of the sensations I could enjoy;of flying, of the wind, of being high up above everything. You don't need to be able to see in order to enjoy an experience.

I loved this post. However, I think I would have had to respond to that lady.....something like...."Florida is hot enough with out having to stand in line behind a bag of hot air all day. "

sigh.....I am new to this journey. I guess I will have to grow into it. :) For now, I think I'll just go get a t-shirt that says "Lord, keep yu arm around my shoulder and your hand over my mouth!"


Have a great trip!

Just seeing Ruby flying in the elephant reminds me of my trips to Disney with my family. Such joy and excitment, truly the happiest place on earth (except for the cranky people)

How does that even make sense??? Wow she must be a bitter unhappy woman. I would have had a very hard time keep my mouth shut Stuff like that makes me so angry cause ten to one her child will unfortunately grow up thinking that as well. I hate that attitude directed at anyone but esp kids with disabilities because life is hard enough for them without comments like that.

When I was a little girl, a group of girls tried to tell me that I wasn't allowed to pop packaging bubbles with them because I "couldn't hear them pop." It was true that I couldn't hear them pop, but until they told me this I had had no clue that hearing children popped those bubbles for anything other than the pleasant, fun sensation of suddenly-released pressure on the finger-tips, along with the slight vibration bursting onto my skin. (How I hated the bubbles that merely squeezed smaller instead of collapsing all at once! Those were no fun! And still aren't!) The idea that hearing children derived a different type of pleasure from the same activity I did was surprising enough to me. But the fact that they completely disregarded the aspect that was so pleasurable to me was utterly bewildering and alien to me. (Fortunately my Mom was there to intervene so I could pop the bubbles too so I didn't get too upset. But I did pity the other girls for being so utterly oblivious to an entire level of pleasure that had apparently not occurred to them.)

As an adult I can now understand pleasure from sound even if I still can't relate to it! But it still bewilders me how some hearing people can be so focused on sound that they fail to notice the existence of any other aspects of the same experience. How can some hearing people forget to notice sights, vibrations, tactile sensations? I suppose blind people must feel the same way toward many of us sighted people and how we focus on visuals. How can anyone have so much trouble understanding that there is more than one way to access pleasure? Even a child who is both deaf and blind could easily enjoy popping those bubbles, or flying in that plane. And would love it just as much as a child who can both hear and see.

I agree: this is a total failure of imagination on her part. Not only does she color everything with one crayon but she colors it all with the color gray: gray for bland and flavorless, without life, without texture.

I had the worst experience at Disney World (you know, the "Happiest Place On Earth") with people (not staff, who are wonderful, but other visitors). Someone was complaining about us being boarded first (she scoffed about my kid being in a stroller not a wheelchair) to which I just finally screamed "she has Down syndrome, autism, and a vision impairment. Is that disabled enough for you or should I chop off her legs, too?!?!?!?!"

(although on a happier note, when we were waiting for the bus, there was a couple in wheelchairs who both also had intellectual disabilities, who had just gotten married! that made up for the ignorance!)

People forget that seeing is the only a slice of the sensory experience.

I have learned to see with my heart. The vision is better that way.

For me, feeling the bubbles *pop* IS the fun part -- those computer games where you can "pop" bubbles by mouse-clicking to just hear and see the pop effect just are NOT the same.

They have computer games for just the *sound* of bubble popping? What's the point of that?!!

Thanks, Andrea, it's nice to know that there is at least one hearing person in the world who enjoys the same aspect of bubble popping as I do :-)

Most people pop bubbles for the sound? I never knew that. For me, it's definitely the feel of the popping that matters.
There are plenty of ways to find your own joy in life.

great shot of Ruby and her folks! nice work Joe.