From Pink to Black: Exclusion and Death 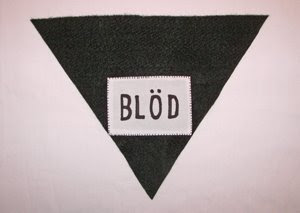 When we first moved to Toronto, we did so partly because we had lived only in small towns and wanted, desperately, to meet other gay people. We wanted to be less alone. We felt that there was always a slight undertone of violence in our interactions with others. That, if discovered, we could and would be brutally dealt with. Even though we know that prejudice lives everywhere, we felt that we would be safer and more anonymous in a large city. I admit we embraced the gay village with gusto. There was a joy in being connected, being part of a community. It was in this context, of joyous discovery, that I first saw a pink triangle. It was being worn by a handsome young man on a streetcar in Toronto. I didn't know the symbol, and being forward, I asked him what it meant.

He told me that gay people in Nazi Germany were rounded up and placed in concentration camps, in the camps they were made to wear pink triangles on their prison uniforms in the same way Jewish prisoners were made to wear yellow stars. He answered my question, quickly, efficiently, and loudly enough to be heard by others. This guy would probably be the first gay activist I ever spoke to. He used my question as a platform to inform, educate and provoke. I've never forgotten that lesson.

I was, understandably I think, upset that I had never been taught that gay people were part of the Nazi purge. Being me, I set out to inform myself and read a number of books about the Nazi persecution of gay people, I went to see the play 'Bent' when it was in Toronto (Brent Carver was one of the stars and it was brilliant) and, of course, bought myself a pink triangle to wear.

Somewhere along the way, I read about how the whole idea for extinction of a race began with the extinction of a people. Those with disabilities were the first, and easiest target. They were, in many cases, already segregated away from others. In other cases they could be tracked by doctors throughout the country. Systematically experimentation on mass killing techniques were carried out at facilities that housed those with disabilities, primarily the institution at Hadamar.

Then, years ago, I saw a documentary wherein a child with Down Syndrome was one of those liberated from a camp. I have sought to find that documentary ever since. But it made me wonder what symbol was worn by those with intellectual disabilities in the camps. Only recently I posted here on the blog a question about the word BLOD and what it had to do with disability history in Nazi Germany. I recieved a number of responses both on the blog and personally.

In all that I finally got my answer, those with disabilities wore a black triangle (for asocial) with a white strip of cloth with the word BLOD (stupid) written on it. I wanted to see what this looked like so I asked my niece Shannon who is one of those artsy, crafty, knitty people if she could make one up for me. She did so and sent me a picture of it over the internet and the real thing in the mail.

Therefore I have placed this symbol on my blog as an act of remembrance that those of us with disabilities are always at the cutting edge of the desire to 'improve society' by elimination of 'others'. We were first with the Nazi doctors. We are first with the gene doctors.

I'm going to frame the black triangle and hang it in my office. I'll wait for people to ask. And if they don't ask ...

I'll point it out.
Posted by Dave Hingsburger at 4:46 am

Aww Dave. Will you mind if I "e-nick" the picture?

and it could do with your expert input...

wow. Thank you so much for sharing that.

Heike, indeed anyone, please do 'e-nick' the picture but it would be nice if you sourced the work to CTF.

Thank you, Dave & Shannon, for doing this. Evil must never be forgotten.

one memory that will stay with me til the day I die is standing in a gas chamber in Germany at a concentration camp.
Also looking into the "operating room" where Dr's experimented on people. Little holes in the wall with doors where prisoners where kept.
Truly horrible......

Unfortunately, many of the gay or differently-abled people released were forced back into cruel institutions, or like some Jews just outright murdered. Their "rescuers" didn't think much better of them then the Nazis did...

May I borrow the symbol too?
Thanks

I have seen the triangle on your blog, for a while, and after reading the background, now am ashamed I didn't ask earlier what it meant. If we wish to do better, we need to know more, the more I know, I trust the more I can do. Thanks Dave. Your posts always leave me thinking about ways to increase not only my knowledge, but societies.