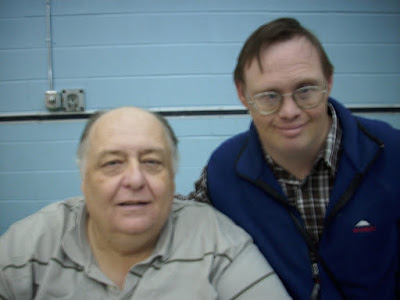 He approached me with seriousness, handed me a flyer and began to walk away. I asked him to wait for a second while I looked at the paper he'd handed me. It was a flyer for the 'Choices for Down Syndrome Society' and on the inside flap the mission statement 'To allow people with Down syndrome to have the right to make their own choices in their qualityof life' was written by David Ash, a self advocate. I took a guess, "Would you be David Ash?"

He told me that he was and that he was there handing out flyers because he wants to establish a large network in the north of self advocates with Down Syndrome. He was a lively and personable guy so we chatted for a few minutes during the break in the lecture day. He told me that he thought it was really important for self advocates with Down syndrome to find their voice and to speak for themselves. He saw the importance of parents and others speaking up but he felt it was particularly important for those with Down Syndrome to tell the world that it was OK to have Down Syndrome and, gasp, that it was OK to be born that way.

Then we moved on to the thorny issue of abortion and he was fully apprised, fully aware that abortion is seen as the 'cure' for Down Syndrome. He said that it was important for people with Down Syndrome to speak up. To discover and use their voice. It was like talking to a holocaust survivor during the holocaust. I have spoken often with many self advocates about issues regarding oppression and stereotyping but this was my first experience in talking, so openly, with someone who's birth right is in question.

I was deeply impressed by his maturity in being able to recognize that others, maybe even most others, think he should have been done away with ... and to still be sane, still be happy. I asked him if he would like a few minutes at the microphone to talk about his organization and his dream for a powerful group of self advocates with Down Syndrome speaking to dramatic and powerful issues. He said that he would like that opportunity. We took a picture together and then it was time to go on with the day, he spoke to a group of nearly 200, who had come from all over northern B.C. - he spoke briefly but well. He left some flyers for people to look at and then he headed out the door. I watched him as he left, full of dignity and pride, full of a mission and a purpose.

Full of a life, well lived.
Posted by Dave Hingsburger at 10:50 am

Wow, what an inspirational person. Thanks for sharing this Dave, and thanks to David for inspiring us all.

okay~ tears! "It was like talking to a holocaust survivor during the holocaust. I have spoken often with many self advocates about issues regarding oppression and stereotyping but this was my first experience in talking, so openly, with someone who's birth right is in question."

Thank you Dave and Dave. I'd hug you both right now if I could.

I should have elaborated - he looks happy, strong, and contented.

My Opposite Boys said...

Thank you, lovely post, and lovely that he met you and got the opportunity for a public platform to speak about his issues. Dear friends of mine had a down syndrome baby - they were twenty at the time and were advised to "put him in care and go away and have normal children" Their son Chris is now a twenty year old, works in a canteen and loves it and lives independently with arm's length support from his parents. He is one of the most charming happy fulfilled people I know. Thank you for this post

He certainly is inspirational. Thank you Dave for sharing David and his mission with us.

He is an amazing person. Thank you for introducing him to us.

Yes, thanks for the introduction and the goosebumps. I am down in Portland, OR, but I would love to see a copy of that brochure. Sounds like a good read. Does his group have a website or anything? I ask before I google....I will go see what I can find.

Thanks once again for sharing.

Can I use this spot to educate for a moment? I hope it's ok. Caroline, it is baby with Down syndrome not Down syndrome baby. Always put the person first because first and foremost our children are people.

"Always put the person first because first and foremost our children are people."

I hate person first language! When I call myself a 'blond person' no one claims I'm saying I'm not 'first and foremost a person'. But when I call myself an 'autistic person', they do. Why the double standard? Are disabilities so incompatible with personhood that we have to mangle the language to remind people that despite appearances, we actually are people?

Regarding the actual topic of this blog post...
Our local radio station had a debate between the leaders of two local disability advocacy organizations (both of them parents of DS kids) and some high-up doctor in favour of prenatal screening, and they had a call-in at one point. I called in and said I was autistic and that although there was no prenatal test for autism, they were doing studies into autism genetics and might find one soon. I told them how worried I was, how I'd heard 90% of prenatally diagnosed DS kids were aborted and was afraid the same thing would happen to autistics (actually, it would probably be worse, because we're so vilified by most of the parent-run autism groups). The one leader from one of the advocacy groups was very nice and talked about how this must be very upsetting for me and how glad she was that I was speaking out about it, and saying she agreed with me.

Dave
I would really like to have a copy of this man's brochure and help him on his mission. Is there a way to contact him? You can email me personally at Kristy@imdsa.org

Oh, this gives me chills! Thank you for sharing this experience with us!

Great story, thanks to you and David for sharing.

Meetings like this give us the best sense of the reality of the life of a person with a disability.