A Corpulence of Challenges

Many years ago I was writing a book, I'm embarassed to say I don't remember which one but I think it was Just Say Know, and I wanted to use a list of 'group' words. I searched around and found a book that fit the bill. That book has been in our bathroom, through three different houses, ever since. Without question it is Joe's favourite book.

Almost every day Joe pulls different things out of the book and reads them to me. I know that after all these years I've heard them all ... twice. So as my enthusiasm was lessening I found that he's tried to addict his niece Shannon to his quirky interest in word families.

I came across an email from him to her (we share our emails, I wasn't snooping) which had the word Venery in the subject line and read thusly:

One Mr. James Lipton wrote a book on venery (couldn't find a definition on line) however, people have been making lists of things since the 12th Century and even before. What am I prattling on about? You know "a pride of lions", "a murder of crows". Well in his book "An Exaltation of Larks" (ain't that grand) under the heading of Home and Family (and I thought of you), Mr Lipton suggests the following:

a persistence of parents,

a consternation of mothers,

a distraction of fathers,

a suffocation of aunts,

a bluster of uncles, and my fave

a mutter of mothers-in-law.

I've been driving Dave batty with these as I make a daily pronouncement: a flush of plumbers, a sesame of locksmiths, an ostentation of peacocks, a twaddle of public speakers. Anyway back to work. Beware, more may come your way.

I smiled at the mere idea that Joe had someone new to 'fascinate' with his hobby. It struck me, after getting an email asking if I was ever going to do another Chewing the Fat contest ... that this might be just the perfect little game.

The rules, simple, take a disability experience and give it a group name ... like a token of behaviourists; a report of professionals; an avalanche of advice; a frustration of stairs; an embarrassment of stares; a hop of crutches ... well, you get the idea.

They look like this ... I am a terrible photographer and couldn't get the flash out, but they are very cool post cards ... take a look. 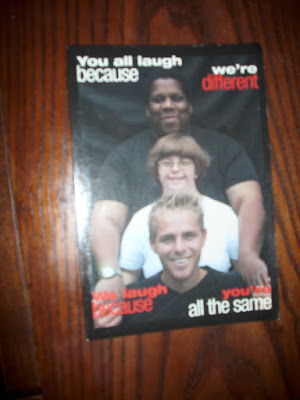 We will announce the winner one week from today.
Posted by Dave Hingsburger at 2:10 am

Probably because of the day I've had, an asswipe of paperwork.

I like "a suffocation of aunts". It kind of says it all, really...

How about an "ignorance of IEPs" ?? Heaven knows that's what it feels like when I'm in the middle of one of those meetings.

How about an assessment of psychologists?

I'm going with 'a flurry of mono-skiers!'

You will probably be able to tell from my offerings that I am having a less than stellar day dealing with my children's school district:

An aegis of educators

A stratification of special ed students

A sycophancy of special educators

I have no disability experience but I'll read the comments with interest...

And I LOVED Uncle Joe's words!

A passion of DSW faculty

An indignity of medical professionals

A potency of parents

A choking of
childless caseworkers

an insanity of psychologists

I wish I had said it first ... "Nattering nabobs of negativism"
- Spiro T. Agnew

Here are my attempts.

I could go on and on...Joe sounds like my kind of guy.

1) a grope of blindos
(I am visually impaired myself before anyone takes offence, these are all from my life experiences)
2) a sdrawkcab (backwards backwards!) of dyslexics
3) a textile of SIDers (sensory integration dysfunction)

An oligarchy of occupational terrorists

A superiority of social workers

A pain of physiotherapists

A basketcase of bureaucrats

A privilege of politicians

I will not go on. Am pissed off with the lot of em!!

A cacaphony of caseworkers

A fiduciary of financial advisers

The silence of simplicity

A pulchritudinous of passionate people!!!

May I add another one I thought of during my commute this evening ...

a cornucopia of care-workers

Hey mister, your story about the kid who said "sorry" had me weepy all day yesterday. Yay for the kids. Well, and for anybody open to new ideas and being respectful.

P.S.
an exactitude of engineers

a precision of aspies

a persnicketiness of proofreaders

an oeuvre of artists

a calculation of accountants

a multitude of mathematicians

that's one of my favorite books. and a fun game. I'll be thinking of more all night...

a persistent plague of politicians

a babble of board members

a calcification of caseworkers

A rainbow of disabled people.

Every disabled person is unique, even more so than non-disabled people because there's the same factors that vary between everyone as well as differences in areas most people are alike in.

A convoy of wheelchairs

A bevy of unique individuals

Not related to disability particularly, though my daughter is LD: A shrill of teenagers.

hey who won? did I miss it? lol

A convulsion of neurologists