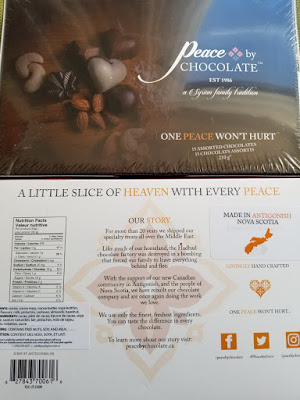 Yesterday I saw a meme about immigration. People really angry at the direction that Canada has taken. We are losing our culture. Claims that someone somewhere wants to ban bacon. Seriously.

Yesterday I bought these chocolates. I was intrigued by the packaging and placement. It was in a section of local, Canadian made products and it said, "A Syrian family tradition" on the box.

I picked it up.

On the front was a picture of chocolates, the name of the company, Peace by CHOCOLATE, company establishment date, 1986 and the slogan 'ONE PEACE WON'T HURT.' On the back was the story of the company. "For more than 20 years we shipped our specialty treats all over the Middle Easst. Like much of our homeland, the Halal chocolate factory was destroyed in a bombing that forced our family to leave everything behind and flee. With the support of our new Canadian community in Antigonish and the people of Nova Scotia, we have rebuilt our chocolate company and are once again doing the work that we love."

I opened the box.

I don't eat sugar anymore but I was with people who were eager to try the chocolates in the box. The declared it either, 'excellent,' 'really good,' or 'fabulous.' It's a good product.

So a family flees for their safety. Comes to Canada and creates jobs, pays taxes and makes a contribution to our life as a country and as a people.

Where's the meme for that?

Where's the talk about that?

People seem to want to disbelieve their own eyes, the evidence that immigration builds Canada. That contributions are made to our culture.

There are those that would tear at the fabric of Canada.

And call themselves patriots.

I love my Country. I worry for its future, not because of immigration but because of the entitlement of those who consider themselves, falsely, as 'true, original, Canadians.' Those that deny their status as children of immigrants who decry immigration.

Posted by Dave Hingsburger at 6:32 am

You and your blog, as usual, got me off to a great start this morning Dave. Thanks. As a grand child and great grandchild of immigrants from Poland & Ukraine, I too worry about the "entitled" Canadian. My hope is that our culture of acceptance grows and Peace someday comes.

We have the same kind here. They love to blame their problems on 'the other.'

My paternal grandfather came from Hungary, and worked for Ford all his adult life. My grandmother's family came to farm - my dad spoke Hungarian because, as the oldest, he was the one who went to help his grandparents on their farm in Michigan. I can still imagine his story of catching the drippings from bacon on bread.

My maternal grandfather was Mexican. My maternal grandmother met him when they were both students at the U. of Illinois - they made their home in Mexico the rest of their lives.

My husband's family was German on one side (his father fought as an American in WWII), and Italian.

I wouldn't exist if people hadn't moved around.

I just looked at their site and they ship to the US. When I can, I will order some chocolate from them. Perhaps for my mom's birthday?

I devoutly hope and pray that the current wave of racist anti-immigration is the last. It's not the first, but surely we humans have to learn at some point that the Other isn't there just to be feared? I refuse to give up that hope.

Canadian racism, i find particularly irksome. So many people, when challenged, tell me "well, were not as bad as the Americans"

Like as long as we stay just a wee bit 'ahead' we're good, and dont need to worry.

I'm so sorry that you are experiencing anti-immigrant crap there, too. It's terrible in the US now, as I'm sure you know. It makes my heart heavy.