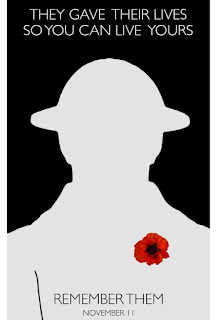 As he lay dying, my father and I talked, really talked, maybe for the first time in our lives. He and I had not been close, but in these moments, our history then lost importance in the face of our history now.What I discovered about my dad, the old and very frail man in the hospital bed, was that the time he spent in the Canadian Army serving in World War II, was still very much with him. And that it had been with him for his entire life. He told stories, some very funny stories, from the various campaigns where he had been deployed. He talked about the men that he served with. It was like the memories from this time in his life were in colour and every other memory from every other time in his life, was in black and white.

"How old were you when you enlisted, Dad?"

"Young, I was a very young man," he answered.

He talked of that young man going to basic training, being shipped over to England and then he paused and said, "You can't be prepared for what happens." He shook himself away from that thought and moved quickly to tell a story that involved water, a monastery and some small exploding device and how they combined to scare the crap out of people.He really laughed at the memory.

Over the time of our chats it became clear that he had to pull himself away from the realities of the war, in which he was a stretcher-bearer, something that make me extraordinarily proud, to funny moments, like he was trying to light candles in the vibrant colourful darkness of those memories.

What I've been thinking about, as I've thought about him after the funeral, was about his personal sacrifice. How much a mistake it is to 'remember the dead' and not 'remember the living who came back changed.' There is no question in my mind that the 'very young man' who enlisted was not the man who came home, he'd been changed by his sacrifice, by his willingness to serve, by the bloody trail that love for country leaves on a snowy Canadian landscape.

It's easier to remember the fallen.

This Remembrance Day is the fist one that my father is qualified and considered deserving of memorializing. But we're wrong, he deserved it every day of his life from the moment he signed up until the moment he checked out.

Every day.
Posted by Dave Hingsburger at 5:52 am