The Life and Death of "the AV" 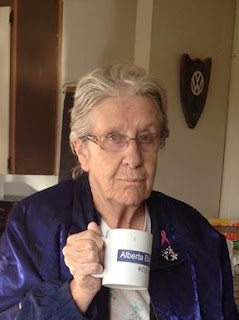 Aunt Vesta passed away last night. I found out this morning. It was my first night home, I had gone to bed early, and I didn't find out until just moments ago when I checked my phone and noticed a call that I had slept through. The news was like a hammer blow. We didn't chat often the AV and I, but there was simply a comfort knowing she was there. And. Now. She's not.

We got to know the AV particularly well when she came to Toronto many years ago and stayed with us. Her husband, Uncle Val, had been flown from Alberta to Toronto to be treated in the hospital here. I remember being a wee bit worried about her coming because Joe and I had a one bedroom apartment and it was pretty hard to hide, as we did at the time, that we were a couple.

When Uncle Val was clearly very ill and the likelihood of him surviving his illness the AV asked us if we could find a minister for her to talk with. We called Rev. Brent Hawkes from our church, informing her that he was the 'gay' minister from the 'gay' church that we attended. She looked at us confused at why we were telling her. We called him. Luckily he was free and he came right away. It was well into the evening when he walked into where we were waiting in the hospital.

They talked for a long time.

She came away from that talk with renewed strength to get through the hard time of Uncle Val's leaving. She never told us what happened in that talk. She just said that there was a final gift she could give her husband and that she knew she had it in her to give him.

I don't know what that final gift was.

I never asked Rev. Hawkes because it was none of my business, and I knew that, and more importantly I knew he knew that.

There is a gift that I can give the AV.

It's a promise to continue to love her and speak of her.

They say there are two deaths, the first happens when you die, the second happens the last time anyone ever says your name. I think that time is a long way off. The AV had an impact on so many people.

In my lectures I tell a story about the AV and what she taught me that changed my practice. It's a fairly long story and I love telling it because when I do I can picture her and hear her voice and be surrounded by her laugh. And now, too, I know that her name will be spoken for a long time still.

I know you have gone AV but I know too, who you were will live on for a long time to come.
Posted by Dave Hingsburger at 7:05 am

Thank you for sharing your lovely AV.

Sorry she’s gone Dave but I understand the wonderful difference she made to your practice and through yours practice, mine. A wonderful wise woman.

the wise ones who teach us never really leave us.

May she go forth shining! And may your grieving be deep, and gentle.