While we were out walking today, with Ruby and Sadie, I was holding Sadie's hand as we walked across a busy intersection. She told me she liked coming down to the city. I asked her what her favourite place in the city was. I expected to hear the Royal Ontario Museum, the Aquarium, the subway, all places I know she loves. But she answered quickly and confidently, going in an entirely different direction: the nail salon.

No question the girls like going over for mani-pedis. I have to admit that it wasn't long ago when I didn't know what that term meant.  As it happened, our plan was to go to the salon that day. The girls were going to get their hair done and then get their nails done so that they were all ready for the big Pride parade on Sunday. We'd talked about their nails and our plan, well ... kinda really my plan ... was for them to get rainbow nails, a different colour on each fingernail. 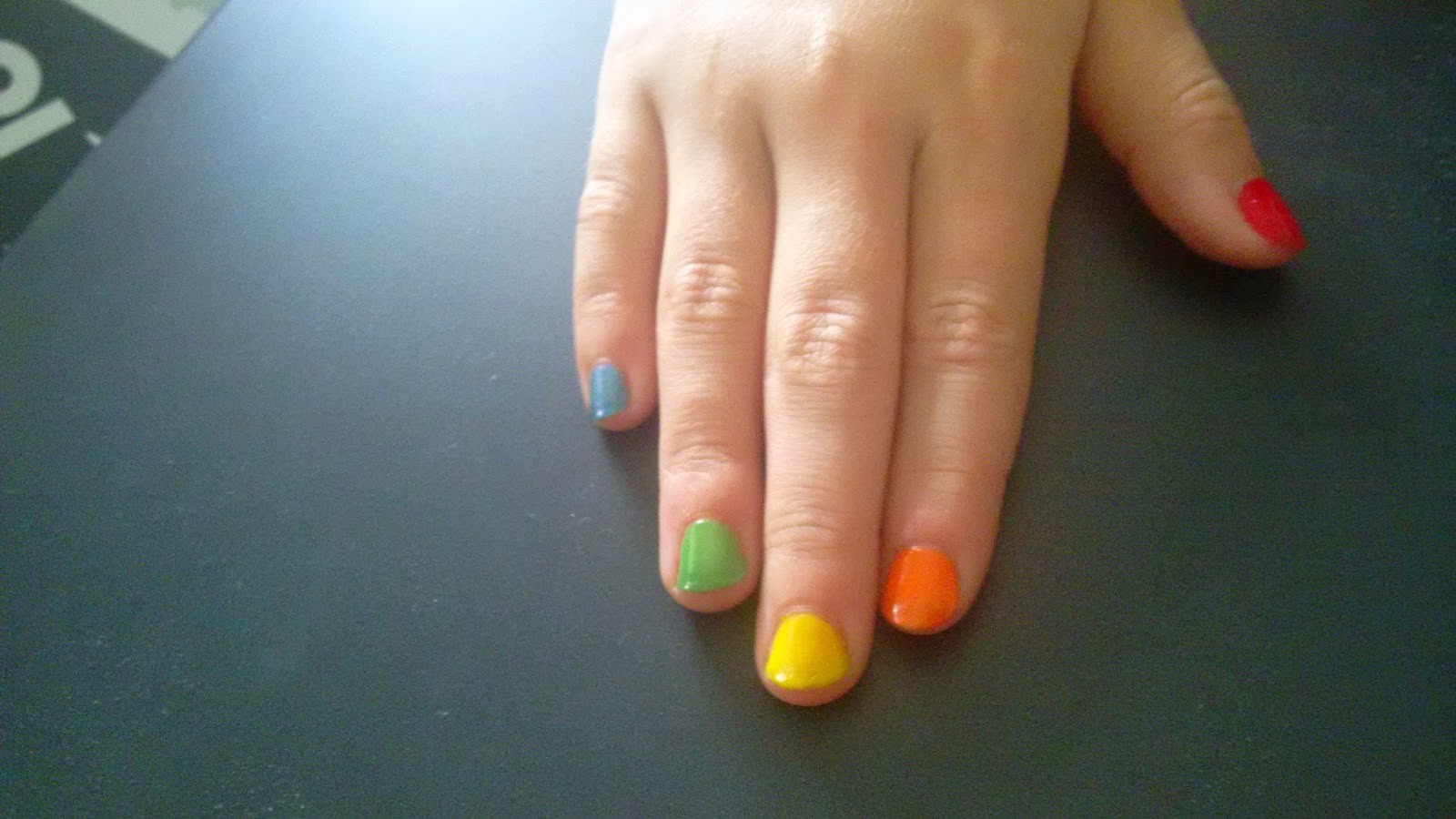 We got to the salon and Ruby quickly picked out five colours, making sure she was getting rainbow colours. Sadie on the other hand picked out two, blue and sparkly red. When she handed them to the woman who would apply them, I said, "No, no, Sadie, get three more colours so you can have a rainbow." She said, "I want blue and purple." I said, "But what about the rainbow," my tone a little (or maybe to her, a lot) insistent. She said, "My rainbow has only two colours."

I leaned down to hear getting ready to encourage her to pick three other colours. Then I saw her. Really saw her. She was clutching those two colours, she looked excited about getting them on her fingers, she also looked a bit ready to dig her heels in. I took a breath and said, "Sweetie, if you want just two colours, I think that's a really good choice." She burst into a grin and grabbed out towards my hand, which was hard to do with the blue and the sparkly red bottles in her hand.

She went off and had a lovely time getting her mani-pedi in her 'favourite place in Toronto.' 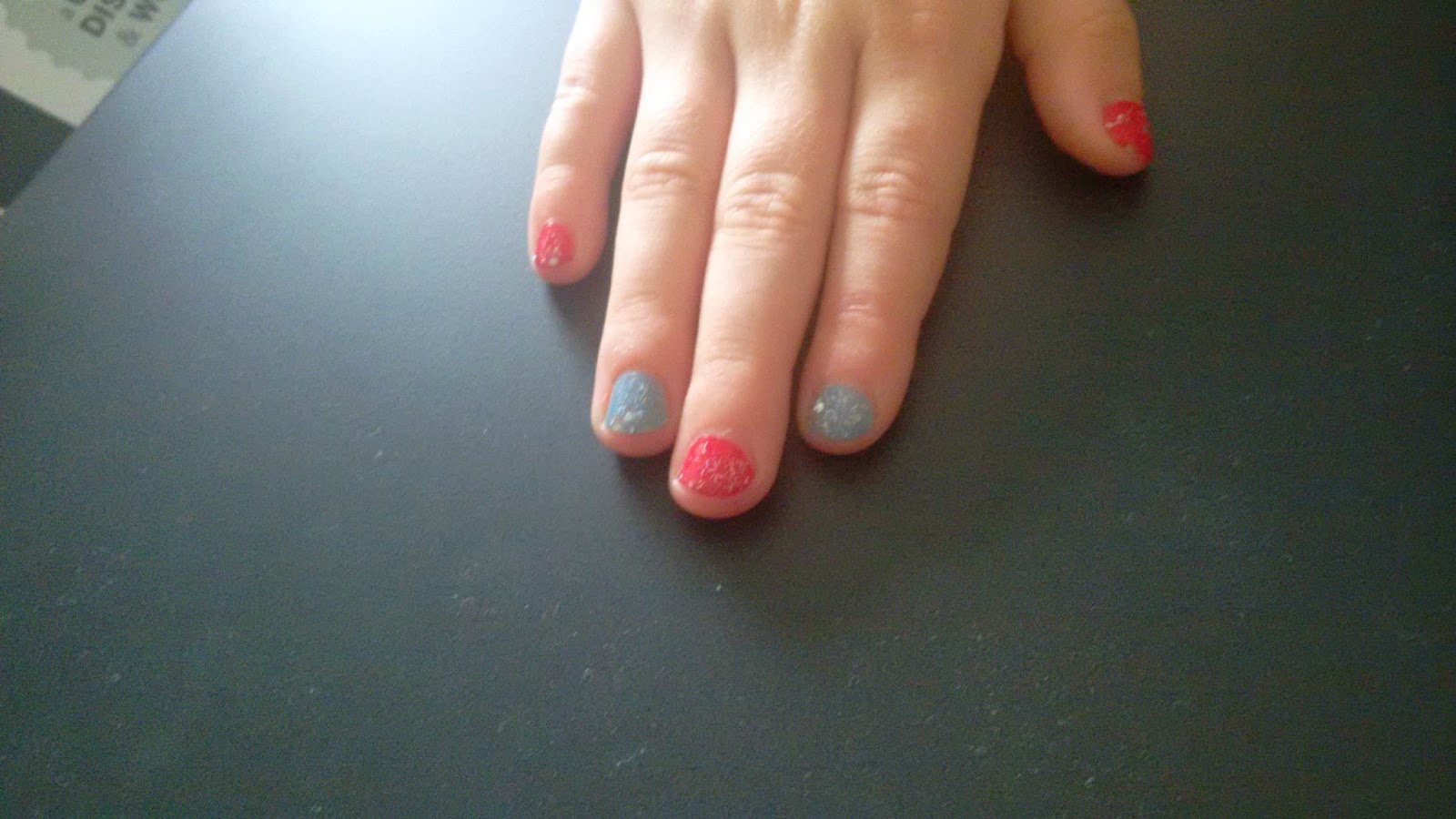 Everyone had a great time and Sadie was really happy with her nails.

And I was really happy that I resisted the urge to 'know better' what she wanted and to let go of what was in my head and let what happened come from her head.

When  we got home and I was sitting in my chair in the front room, she came running over to show me her nails for the hundredth time. I said they were beautiful and she gave me the biggest hug.

I don't think it was for my compliment.
Posted by Dave Hingsburger at 4:58 am

We all teach one another constantly, but no one does it like children! lol!

"my rainbow only has two colours"! And why not, if the idea of the rainbow is celebrating diversity than a 2 colour rainbow shouldnt be discriminated against! I also love that comment "looked a bit ready to dig her heels in", I so remember that look from when my kids were little.You were smart to bow out gracefully.

What you say is interesting though, because society doesnt tend to think of children as having rights and choice. One of the complaints by intellectually disabled adults is "dont treat us like children", because everyone knows that children dont get to decide things for themselves. Allowing children to make different choices than we want them to tends to be seen as "spoiling" the child,and "letting them get their own way" is just making a rod for your own back. Kids arent supposed to "win" against adults because then they'll become unbearable brats that we cant control. Which is the bottom line problem,we shouldnt be trying to "control" another person whether theyre intellectually disabled or still a growing child. And its totally right that those with less power get to experience winning against the more powerful,its what keeps the power difference from being an abusive one isnt it?

Oh it's those moments when the message to be quiet and listen finally gets through that the greatest insights can happen. And yes, to everything Emma says.

Oh Dave, you are a wise man!